Recommended: If you're looking for a change of pace

Since about 9 out of every 10 puzzle games feature falling blocks of some sort, it's nice to see Magnetica change things up a bit. Rather than sticking with the old norm, Magnetica (also referred to as Zuma) usually features a variation of a loop that ends at a designated point. It's your job to fling marbles at others of the same color in an effort to keep them from reaching the end.

This may sound simple, but harder levels really require a bit of strategy. Connecting three marbles of the same color will destroy them, but it's far more useful to set up elaborate chains for combos. During your first couple dozen levels or so, you'll probably just throw yellow marbles at yellow marbles, red at red, etc. After getting accustomed with the gameplay, however, you'll intentionally place colors apart from the pack while setting up your chains. Getting especially high scores will earn you better medals in the Quest mode. 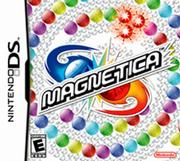 As you progress through the Quest levels, new obstacles will be gradually introduced. Whereas you start with only marbles and loops, you'll end up facing black holes, ion storms, impact barriers and more. Ion storms are especially interesting, as gas will cover the screen, requiring you to blow into the microphone to scatter it. Unfortunately, not all obstacles are good additions. Some (like the gravity-warping field) are simply annoying and needlessly complicate your aiming. Later levels will also introduce more colors of marbles to go up against.

Magnetica does a pretty decent job of keeping the gameplay relatively fresh. Rather than using the same stage mechanics each time, some levels will introduce multiple launch points. Others will have special holes in the corners that will activate a slot machine when a marble is inserted. There are a few boss fights, and these are all pretty fun and completely different than the standard levels. Despite all of the different features in the levels, it usually just boils down to throwing marbles at other marbles, which eventually gets fairly repetitive.

Outside of the main quest, there are puzzle, challenge and multiplayer modes. Puzzle gives you a set amount of marbles, and you must figure out how to use them to destroy all of the others. Challenge is typical "see how far you can go before you lose" puzzle gameplay. Multiplayer is actually quite fun, as you can use powerups to hit your opponent with ion storms and other obstacles.

In terms of portable gaming, Magnetica is quite good. It's very possible to pick up and play for a quick challenge or a long-lasting puzzlefest. Worth picking up for anyone who is looking for a change from the typical puzzle formula.