Try: Dribbling a two-story beach ball with your car on a five lane highway in real life. It's not as easy as it looks.

It's a curious decision that Sega would choose to include the original Outrun 2SP with their latest arcade-style racer, Outrun 2006: Coast 2 Coast. After all, the 2006 version is basically the same game: same graphics, same gameplay, same music, even the same courses. The only real improvements are some new game modes and a handful of reworked courses.

Fortunately, the gameplay at the heart of Outrun 2006 still holds up fairly well, even if it is simply rehashed from the last title. The game puts you and your digital girlfriend in your choice of Ferrari and pits you against the clock as you race across a variety of courses in effort to reach the finish line before time runs out. Hitting checkpoints extends the clock, but a number of rivals and other traffic will slow you down along the way. It's an age-old formula that still plays surprisingly well. 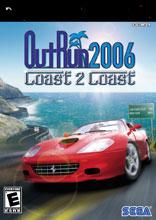 In addition to the classic Outrun mode, the game offers a number of other mini-games and challenges. The main single-player draw is the Coast 2 Coast mode, which allows you to earn points through a variety of challenges in order to unlock new cars, courses, songs and more. These challenges are divided into two broad categories. The first are a series of tests given to you by the flag man. These include traditional races and a number of technique drills that test your skills at things like power sliding. The other set of challenges are the girlfriend mini-games, which give you a number of bizarre objectives to earn hearts from your special lady. Typical challenges include avoiding alien abduction, dodging falling meteors and dribbling giant beach balls. While it sounds like there's a lot to do in the Coast 2 Coast mode, in all reality, you can plow through it in a week and never want to touch it again.

The same goes for most of the other game modes as well. Modes such as Heart Attack and Time Attack are basically the same as what's found in Coast 2 Coast mode, so if you've played through that, you might pass on these additional modes. The game also supports online multiplayer, but even this falls short due to the small number of people who actually play online. Worse, the game features no kind of split-screen multiplayer, further cutting down on its replay value.

Control in the game is extremely simple, giving the game an easy learning curve. With automatic transmission, the entire game can be played with the analog stick and two buttons: one for gas, the other for brakes. Manual transmission also gives the ability to gear up and down, but regardless of which option you choose, the controls are very easy to pick up. In fact, the only moderately advanced technique to learn is power sliding, which you can do for ridiculous amounts of time. In fact, some levels will literally have you drifting the entire course to meet the stage's goal.

Graphically, the game is built off the exact same engine that was used two years ago in Outrun 2SP, so don't expect to be floored by the visuals. Collisions are pretty simplistic, especially when compared with more recent racing games like the Burnout series. The car models themselves look pretty decent, although they haven't been upgraded much since the last outing. That said, the game does run extremely fluidly, with a very consistent framerate. The courses are also very diverse, with a wide variety of decent-looking landmarks.

Sound-wise the game is passable, but suffers from the same problems as the graphics do. Namely, it's all the same as it was two years ago. Virtually all the songs are simply remixed versions of Outrun 2SP's soundtrack. In other words, if you're into Japanese easy listening, you're in for a treat. Additionally, most of the sound effects remain unchanged, although they still remain passable even by today's standards.

If you never played the original Outrun 2SP, then the 2006 edition is definitely worth at least a rental. It's easy to learn and the Coast 2 Coast mode gives you a wide variety of gameplay that's enjoyable on a very basic level. However, anyone who played the last game is going to be sorely disappointed. This model is definitely in need of a tune-up.