Don't judge Gabby La La by her small stature. Or her cuteness, for that matter.

Because if you do, you might overlook the fact that she's a sitar virtuoso, a master of the theremin and a mean tightrope walker.

In fact, if she didn't love playing music so much, she might have run off to join the circus.

"I really liked tightrope walking. That's what I wanted to do ... so I guess that was the only other plan was like I would either be in the circus as a tightrope walker or I would be a musician," La La says.

Presently, La La is crisscrossing the country with Les Claypool, the legendary Primus frontman, as his sitar player and backup vocalist. Between Claypool gigs, La La, 27, plays solo shows. With her sometimes-pink hair, pixieish demeanor and squeaky high-pitched voice, she has been compared to everyone from Yoko Ono to Hello Kitty to Bjork. But the truth is, La La is one of a kind.

"I'm still being myself. Always. Les definitely encourages that," she says. 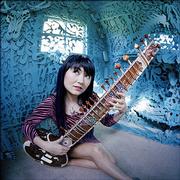 Just a few years ago, La La attended Claypool shows as an audience member in her hometown of Petaluma, Calif. Her big break came when her band Love Balm scored the opening slot at one such gig. Claypool was so impressed with La La's sitar sound that he asked her to be in his band. Then he signed her to his label, Prawn Song Records, and produced her 2005 debut album, "Be Careful What You Wish For ..."

The album is a collection of what La La calls "ditties that go along with my life." One ditty, "Walkie Walkie Walkie," is about walking her miniature French poodle, Crispin. Another is about the boogie man. Despite La La's whimsical lyrics, her accompanying instrumentation is anything but amateur.

In addition to her sitar, La La totes around a ukulele, a theremin (an electronic instrument played by moving the hands near its two antennas), a toy piano and an accordion. She says her obsession with instruments started at a young age, when she became entranced by George Harrison's sitar.

"I didn't know what it was. I just heard a sound and I was like, 'I have to make that sound!'" she says.

Since mastering "that sound," La La has played the sitar with Snoop Dogg on "The Tonight Show" ("He liked it," she says), recorded with Macy Gray and now tours with Claypool.

"Sometimes I look over during the show or when we're playing video games in the back of the bus, and I'm like, 'Dude! That's Les Claypool!'" La La says as she knits a baby-pink and brown blanket on the tour bus.

It appears that ditching tightrope walking for music was a good choice.

"Les' audience has gotten to know who I am," La La says. "I'm not just some random person anymore."