Bad: No progress tracking, no sudoku

Nintendo has been very focused recently on marketing games towards nontraditional gamers. Nintendogs was the first to really reach this audience, and the original Brain Age game was a very successful follow-up. You didn't have to be a veteran gamer to pick up a stylus and play some sudoku or do some math problems. Following up on its success is Big Brain Academy, a title that features a few great new games but falls short in some key aspects.

Games are divided into five categories: Compute, Memorize, Think, Identify and Analyze. Each features three games with three difficulty levels each. Unlike Brain Age, all of these are immediately available. The original title required an almost daily commitment, marking the calendar whenever you complete a test. It took at least a few weeks to unlock all of the games, so it's somewhat nice to have everything open from the start in Big Brain Academy. 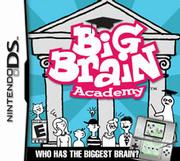 Whereas Brain Age was more focused on math and numbers, Big Brain Academy is a much more visual experience. Tests will require you to assemble shapes, memorize flash cards with animals on them, connect dots in a drawing and identify silhouettes. Thankfully, this installment has omitted the faulty handwriting and voice recognition of Brain Age. Far too many times in that game, I'd try to write a number or say a word and have it completely misunderstand my intention. Big Brain Academy is purely based on touchscreen control, and it's the best improvement over the original.

It hasn't all been improvements, however. Brain Age gave me a true sense of productivity as I progressed through it. I could pull up a line graph at any time that would directly show my progress through the weeks. It would also randomly present me with questions and tasks, such as drawing the Statue of Liberty or remembering what I ate for dinner two weeks ago. Big Brain Academy is much more predictable, which makes it a little less exciting to pick up and play each day. Brain Age regularly offered new experiences, and Big Brain Academy puts all its cards on the table right away. The lack of Sudoku is another huge drawback that is guaranteed to hurt the replay value.

The evaluation system is markedly different, although equally effective. Brain Age showed how "old" your brain is, and Big Brain Academy measures it in "weight". On top of this, it also gives you a grade and tells you what you have the brain of (an accountant, Shakespeare, etc).

Visually, this game is a completely different experience than Brain Age. Whereas the latter title was sterile and straightforward (mostly black-and-white with simple menus), this one is full of life (squiggly cartoon characters all over the place, much more colors). Going with the brain theme, I'd say that Brain Age is more for your left brain while Big Brain Academy caters to the right.

Multiplayer in Big Brain Academy is a definite step up over the last installment. You and several friends can link up (even with one cartridge) and compete against each other to reach a target brain weight. All of the games are available and it makes for a great multiplayer experience.

If this title was the first in the Brain series to be released, I probably would have liked it much more. Brain Age spoiled me with progress tracking and sudoku, which leaves me more than a little disappointed with Big Brain Academy. Even with its drawbacks, I'd still recommend a purchase considering the $19.99 price tag. It offers enough fun games and pick-up-and-play aspects to make it a solid addition to the DS library.