The Nintendo of today and the pre-DS Nintendo don't even resemble each other anymore. When the DS was announced, the GameCube was in the middle of a huge drought of quality games. Adding to this uncertainty around the company was the fact that the concept of the DS really just confused people. Two screens? Why? Hey, look at this PSP! Its graphics are way better!

What a difference a year and a half makes. Sony's PSP could accurately be described as a huge disappointment, and Nintendo is the talk of the town again. The Wii dominated E3, and the DS now boasts a huge library of AAA games. 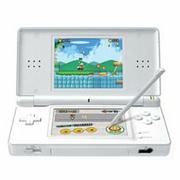 I was a huge fan of the original DS and played it constantly, but there is no way I can go back now. The DS Lite takes everything that was great about the original and makes it markedly better. Cosmetically, it's head and shoulders over the bulky gray (or blue) box from before. Taking a visual clue from Apple, it's smooth, simple and white. As the name would imply, it's also noticably lighter and smaller in overall size than its predecessor.

Despite the great changes to the appearance, the true appeal of this new system is the new screens. I played a race of Mario Kart on the Lite and then went back to the original, and honestly thought the battery was dying on it. "This can't be right," I thought. "It was never this dark, was it?" While it may have sufficed prior to the Lite's launch, it just won't do anymore. The Lite has spoiled me.

Smaller changes are present as well, such as the relocation (and re-sizing) of the stylus. It's now on the right side, and the stylus is noticably larger and more comfortable than the old black toothpick from the previous system. Next to the stylus holder is the new power switch, which replaces the black button from before. Start and Select have been moved to the bottom-right of the lower half, and the microphone is now directly in the middle of the two screens. The L and R buttons seem less pronounced, and might be my only minor complaint with the Lite. I noticed my hands cramping up when playing Metroid Prime Hunters, and I never had that problem with the old DS.

It's hard for me to say anything negative about the original DS considering how much fun I've had with it, but it's even harder to go back after experiencing the Lite. For anyone who has been holding off on purchasing a DS, now is the time. No matter what kind of gamer you are, the DS has something in its library that you'll love, and the Lite makes the experience that much better...especially with the price tag of under $130.