Funniest Moment: Eating a water-skier in mid-air as he jumped off a ramp

Remember collecting conch shells as some wimpy diver in the first Jaws game for the NES? For some reason, that was the objective, and you always ended up getting your shit rocked by Jaws. Thanks to Jaws Unleashed, gamers can now experience that moment from the other perspective. It's far more entertaining, but the game as a whole is a deeply flawed one.

A fully free-roaming Amity Island is your playground, complete with packed beaches, sunken ships and jet skis. Most of the fun is found in simply swimming around, causing mayhem and terrorizing the island. It's great to be able to recreate scenes from the films, such as sneaking up to the beach and dragging unsuspecting swimmers underwater. 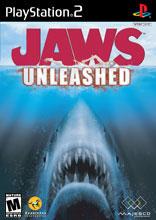 Jaws can perform a good variety of moves, and some of them can be hilarious. My personal favorite was dragging a victim across the surface of the water, followed by flinging them at a rocky cliff. At this point they explode into a highly satisfying cloud of blood and entrails. Another great move is the "body bomb", which allows you to fly out of the water and land on a boat (causing it to explode more often than not). You earn ability points as you destroy boats and beat missions, and these can be used to level up a few key attributes. As you level these up, new moves become available.

While the shark can perform some entertaining moves, he is by no means easy to control. Most of this is due to the downright awful camera that gets caught on environmental objects and occasionally points in the completely wrong direction. At one point, I jumped high out of the water and somehow entered some glitchy parallel universe. The game will lock up randomly, the shark will constantly get stuck, controls won't respond and some missions will make you want to toss the controller through the TV.

The main offender in the missions category takes place in the last fourth of the game, and is entitled "A Taste For Blood." It's quite possibly one of the most annoying stages I've ever played through in a game thanks to the lack of precise control. At the outset there is dozens and dozens of mines floating in the water, and you must navigate through them. The problem is, the controls are so bad that you'll oftentimes hit the mines and fail the mission even if you do everything perfectly. Your tail might swing too far to the right or the bite animation may go too far when you feed, and this can send you right into the mines.

Once I got past this hellish portion of the mission, my next objective was to eat four divers. After numerous attempts, I finally ate the first three and made my way to the final one. I scared him out of his hole, and then:he just disappeared. These kind of inexcusable glitches happen constantly in Jaws Unleashed. Swimmers will freeze in mid-stroke and boats will disappear into some unintentional Bermuda Triangle. I can't believe glitches like these happen constantly in a game that has already been shipped to stores. It seriously seems like a game that's about 70% complete.

It's not always this bad, however. Most of the huge glitches and annoyances take place in some poorly designed story missions. Large amounts of gameplay can be found by swimming around to the 30+ side missions scattered around Amity Island. Each has three levels of difficulty, and some are a lot of fun. It's obvious that many were designed around the fact that random destruction can be a blast. One mission requires you to eat bungee jumpers as they dive off a cliff, another has you hurling explosive barrels at businessmen's houses and my favorite involves eating water-skiers as they jump off ramps.

The effects may have been cheap back in the 1977 film, but they look a whole lot better than the sloppy mess presented in the game. Textures are plain, animations are jerky and nothing is even remotely visually appealing. Thankfully, the soundtrack resembles the unmistakable Jaws score. While it features strong music, it seems like they just pulled random people off the street for the voice-acting.

Jaws is a game that doesn't deserve a purchase, but it also isn't bad enough to be completely ignored. It may have some terrible technical issues, but I can't deny that I had fun during certain parts. The main story doesn't last long at all, but the sidequests and random fun can keep you playing for a while. Fans of the hidden packages in the GTA series will be in heaven here, as there are countless hidden license plates, body bags, treasure chests and more to be found around Amity Island. Worth a rental at least for fans of the film or senseless destruction.