The last few years have seen an obvious surge in the popularity of Texas Hold 'Em poker. Celebrity Poker, the World Series of Poker, online poker, you name it poker is everywhere. If Stacked with Daniel Negreanu is any indication, there's at least one place it doesn't belong, and that's console gaming systems.

Obviously, anyone can sign up for one of the many online poker sites for free and get a quality poker experience with real opponents. That's the inherent difficulty with making a game like Stacked. How do you make it worth paying $29.99 for something that people can get for free? Developer 5000ft seems to think that can be accomplished by an extensively researched poker A.I. system called Poki. Other poker titles feature opponents that are clearly selected from a finite number of player types (super-aggressive, super-conservative, etc). What Poki is supposed to do is simulate real-life opponents that will learn your playing and betting style and adapt as the game goes on. 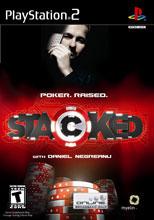 Since you can't see what cards the A.I. players have, it's hard to say exactly how realistic their decisions are. For all the gamer knows, they could be folding pocket aces. What I did notice is that there is a certain amount of realism involved. It's often easy to bully the other players around by putting out huge bets, but if you tend to do it constantly it's only a matter of time until someone calls your bluff.

Despite occasional flashes of intelligent A.I. such as this, it's still obvious that you're playing against a bunch of polygons instead of a flesh-and-blood opponent. Hold-'Em isn't just about betting and folding, it's about being able to read the guy across the table from you. Subtle "tells" can help you analyze what cards they have in front of them, and Stacked leaves no room for subtlety. There are buttons to bet aggressively or timidly, as well as smile and frown. I found this to be completely unnecessary, as it does a terrible job of simulating actual poker psychology.

Career Mode starts out with a terribly bare-bones Create-A-Player mode. You choose from a very limited number of body types, and then swap color palettes and put some glasses or a hat on them. When 1998's WWF WarZone for the Nintendo 64 has a deeper customization system than a game released in 2006, there's obviously a problem.

After creating your basic character, you can choose from a few different types of Hold-'Em. Cash games and tournaments are both available, as well as tourney qualifiers and satellites. You'll work your way up the ranks and unlock new environments and pro players, but never once will you get to play anything other than Texas Hold-'Em. I'd like to think that a $29.99 poker title would feature more options than a free internet site, but that is sadly not the case.

One of the biggest problems with the actual gameplay is the terrible interface. Everything is clunky and entirely inconvenient, even forcing you to pause if you want to get a full list of chip-leaders and remaining players. It's also hard to bet exactly how much you want. You can use the d-pad or shoulder buttons to increase or decrease a bet, but it tends to jump around too much in terms of amount. One of the only decent features of the game is the "Poker School" videos featuring Daniel Negreanu. There are several different videos, and he'll teach you everything from basic rules to strategy with a low pocket pair. It's worth watching regardless of your experience level with poker. 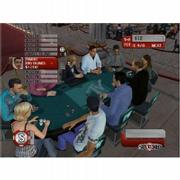 Despite his obvious mastery of the game and good advice, his in-game tips are extremely odd at times. Granted, this isn't his fault, but rather the developers. At one point I had queen 9 (offsuit) before the flop, and he advised me to go all-in. This was early in the game, and there was absolutely no reason to make a move like that. He'll also sometimes advise you to go all-in if you don't even have a pair. Bluffing is one thing, but Stacked gives some advice that would really screw you over in a real game of poker.

Graphically, it's obviously more detailed than the simple top-down view of most poker sites, but it comes at the expense of gameplay. I'd much rather have a good view of the table, chip counts and cards than a better-looking polygonal character. The default card view option even forces you to press a button to take a simple glance at your hand. When players get eliminated from the table, they just stand up and awkwardly fade into oblivion (I guess a "walking away" animation was too complex to program). One of the most ridiculous aspects of Stacked's graphical neglect is the chip stacks. No matter how many chips you have, it always looks like you have two chips in front of your character. Audio is restricted to oft-repeated banter and random background chatting.

While the online play might help the replay value a bit (especially with the scheduled tournaments on the official sites), it by no means warrants a purchase of this title. The experience pales in comparison to online poker, both in terms of cost and ease of play.