Good: Great for pick-up-and-play, personality, sound, use of stylus to emulate a light gun

Back when light-gun games were still regularly produced, Point Blank brought something new to arcades and the original Playstation. Instead of blasting through countless random thugs, Point Blank was more like the WarioWare of the genre. Manic, fast-paced minigames were thrown at the player rather than presenting a more traditional linear path. Point Blank DS captures the personality and feel of the series pretty well on the DS, but the experience is ultimately far too short-lived.

Substituting the DS stylus for the standard light-gun is a novel idea that actually works. Sure, it makes it a little easier to aim accurately, but Point Blank is just as much about speed as it is aiming. Arcade mode is most likely where you'll spend most of your time, and it features four different difficulty settings (one with four stages, the rest with eight). The first couple difficulties (Practice and Beginner) are cakewalks, and serve as a decent way to get acquainted with the structure of the gameplay. Once gamers have reached the "Insane" difficulty level, almost every single level is a true challenge. 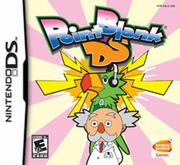 Prior to each stage, the top screen will inform you of your objective, the time limit, and the amount of ammo available. Once the game starts, it's generally 20-30 seconds of manic tapping. Skeletons will bounce around the screen, cardboard-cutout gangsters will pop out from behind walls, and tons of pissed-off bees will fill the screen. In these types of minigames, the objective is simply to "shoot" (a.k.a. tap) as many of them as possible before the time expires.

While there are a good number of these shooting minigames, some others require more focus and speed. One game drops five playing cards onto the screen, and you have to quickly tap the one with the highest value. Another shows six analog clocks, and you must tap the one that matches a given digital time. Some are even shorter than the typical 20 seconds, as one requires you to kill a single fly in less than four seconds.

Outside of the standard Arcade mode, there is also a Brain Massage mode that you might initially believe to be reminiscent of the other DS brain games. This isn't the case, as this mode forgoes the mathematics and logic problems of those other titles. All this mode offers is the standard minigames, but it gives you an odd rating like "Intense Chiropractor" or "Beatnik Cop" at the end. Granted, it does show a graph showing your skills in certain areas, but it seems far less researched and complex than Brain Age or Big Brain Academy.

The last two modes are VS. and Games Museum. The former is a blast and can be played with only one game cartridge. It's fairly straightforward (only offering the same games from Arcade), but it's still a lot of fun to challenge a friend. Games Museum is relatively worthless, and only offers a few yawn-worthy recreations of old coin-op games.

Point Blank has always had an extremely odd (and extremely Japanese) personality and presentation, and this DS incarnation recaptures that perfectly. Graphics are unique and full of life, animations are hilarious, and the two seemingly coked-up doctors are back. All of the audio fits the mood perfectly, with fast paced music and great sound effects.

It's easy to have a fun time with this game if you just pick it up and play for a short period of time. Despite this, it certainly doesn't feature enough content to warrant a purchase. Most gamers will get tired of this title after they've experienced all of the minigames a few times over (which doesn't take too long). If anything, this is an above-average first foray into light-gun games on the DS.