Hope: Your kids don't curse as much as I did during the tire-stacking minigame

Cars for the DS is a completely different title than its console brothers, abandoning the latter's free-roaming world and race-driven gameplay for a collection of minigames. Some can be slightly entertaining and might satisfy a younger crowd, but the extremely short length of the game promises a brief experience.

The minigames themselves vary in quality, ranging from inane to almost-fun. Most feature the stylus (one features the microphone), and the majority of them don't even involve racing. You'll fish for random junk out of a lake, launch a truck into the sky to collect stars, collect trophies falling out of a semi, and even participate in a rhythm game. 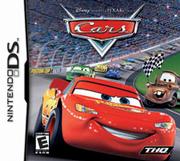 The worst game by far involves stacking a ton of tires on top of each other. This is accomplished (supposedly) by flicking the stylus towards the stack while accounting for wind speed and direction. No matter how much I tried to accurately aim the tires, it always seemed to veer away from the stack. It's not that hard in the first round, but by the time you have to stack 30 tires you'll be ready to throw your DS out the window.

I mentioned that there are "races," but I almost feel like they're not worthy of being called that. Rather, you're on a course that appears winding on the map, but it's always presented as a straight road on the DS screens. Cars are all over the place on the course, but they have no effect on the race (you only race against one car that counts). All you can do is accelerate, brake, and jump, and none of your actions seem to have any bearing on the outcome of the race. No matter what you do, the car you're racing against stays directly beside you. It reacts like the most extreme case of rubber band A.I. possible. There were several instances where I didn't make a single mistake, but I ended up losing for some random reason.

Cars actually looks pretty good on the DS, with well-animated characters and sometimes-interesting backgrounds. On the audio end, it sounds fairly canned, but the tunes themselves are upbeat and fit the game well. Prior to minigames, you'll see a static story screen with some text, but there's no voice-acting whatsoever.

While it may be fun for a short car trip for some kids, it's far too short to recommend a purchase. You can literally see everything this game has to offer in about 2 or 3 hours, and probably won't have the urge to pick it up again after that.