Still Creepy: Talking cars having eyes instead of a windshield

Developed by Rainbow Studios (the team behind the MX vs ATV series), this console version of Cars behaves like a mix of a standard racing game and a GTA-esque open-ended adventure. Many aspects of the title work well within this environment, but the package as a whole is brought down due to some pretty generic racing gameplay that offers nothing new.

The main Story mode takes place in a free-roaming Radiator Springs. All of the characters and many of the events of the film are re-created within the game. You won't always play as the same car, and each one can be taken to the paint shop to get a different exterior. Basic gameplay involves driving from point of interest to point of interest, participating in a variety of minigames and races. 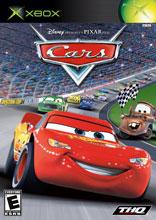 For a game called Cars, it's odd to see that the racing is the least interesting aspect. Controls are terribly basic, and advanced techniques like powersliding perform terribly. Even the simple concept of going into reverse is awkward, requiring you to press the button twice before you can move. Upon starting most races, my brain pretty much shifted into autopilot. It's not that it's awful, it's just terribly generic and slow. Nothing that occurred during the dozens of races I participated in excited me whatsoever. The added jump and tilt maneuvers really don't come into play often at all during these races, and don't add anything to the experience. At no point do you get a true sense of speed, which is crucial for a racing title.

Some of the minigames are actually pretty fun, and they can all be unlocked to play at any time. Some are fetch quests while another features you "tractor tipping" while trying to avoid a giant enemy vehicle. These minigames are crucial to the title, as they do a great job of breaking up the monotony of the races.

In order to make a truly fun free-roaming game, the environment has to be populated with a good amount of activities and fun time-wasters. Grand Theft Auto did this very well, but many of its countless impersonators don't quite get this concept. Cars falls into this unfortunate camp. Outside of driving from objective to objective, there really isn't anything to do outside of collecting the scattered bonus points. There's not a lot of changes in altitude either, so you're basically just driving around a mostly-flat landscape. While there are a few destructible environmental objects, most fences and other obstructions don't budge at all. The in-game map doesn't do a very good job of showing your location, so you'll have to rely heavily on the radar in the corner of the screen.

Most of the actual characters look good, but the environments lack any sort of visual polish. There is a huge amount of noticeable pop-up and fade-in issues. It's slightly better on the Xbox version, but still present. Playing in two-player deals a heavy blow to the framerate and makes the game seem even slower than it already did. The soundtrack is borrowed from the film, and it's a mixed bag. Some fit the mood of the game well, but others seem like flavor-of-the-moment MTV crap. Despite the mixed soundtrack quality, all of the voice-over work is great and features the authentic cast from the film.

I can see this title being a lot of fun for young fans of the film that aren't familiar with more advanced racing games. The story mode offers a lot of gameplay and features characters kids are sure to enjoy. For gamers familiar with the speed and thrills of something like Burnout or Mario Kart, however, it just doesn't offer anything new at all. Recommended for the 12 and under crowd, but more seasoned gamers should steer clear.