I'm probably the most hardcore Metal Gear Solid fan you could ever meet. The three titles in the core trilogy are my three favorite games of all time (Sons of Liberty being my all-time #1), I visit multiple MGS message boards, watch every trailer dozens and dozens of times, and gave MGS3: Subsistence the highest score ever given on Lawrence.com. Despite this, I recognize that the Metal Gear name has some faults when you stray from the main three games. Metal Gear Ac!d never did it for me, Twin Snakes had its issues, and I wasn't a big fan of the comic books.

Those comic books have now been assembled to form Metal Gear Solid: Digital Graphic Novel on the PSP. Taking the original Ashley Wood illustrations, this title animates them and adds audio to present a wholly unique product. Neither game nor movie, it straddles the line and ends up being a very interesting (albeit flawed) title.

Gameplay is virtually nonexistent, and you'll basically only press buttons in two situations: advancing the page and entering the "Memory Building Simulation." The latter is an odd little feature that freezes the frame and allows you to search within it for certain memories or story points. Once you enter this mode, you can zoom in and out to look for these memories, and press X to collect them. These can then be connected in a giant spherical grid. It's as odd as it sounds, and it actually comes off as a half-assed effort to include some semblance of interactivity. If I'm not remotely interested in this mode, and I'm as hardcore of a MGS fan as they come, then I highly doubt the average Joe Gamer is going to even bother with it.

This title isn't about finding hidden "memories," however. It's about the story of Solid Snake infiltrating a remote facility in Alaska. Digital Graphic Novel is actually the third retelling of the Shadow Moses incident, preceded by MGS: Twin Snakes and the original 1998 Playstation title. Playing through the latter title for the first time is still probably my favorite gaming experience ever, so I'm always intrigued when I hear it's being resurrected in a new form. Twin Snakes on Gamecube did a good job of updating the gameplay, but it wasn't too faithful to the world of the original (something that pissed off a LOT of hardcore MGS fans). 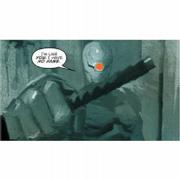 Being a very short experience (around an hour and a half), it's obvious that Digital Graphic Novel had to cut a ton of the dialogue and story elements from the original. Unfortunately, this results in a far more dumbed-down version of the Shadow Moses story. It barely touches on the complex relationship between Solid Snake, Liquid Snake, and Big Boss. Naomi's history with Grey Fox seems like an afterthought. All of the bosses (Psycho Mantis, Vulcan Raven, Sniper Wolf) seem like standard henchmen, and it skims over most of their backstories. Despite this, it does introduce a couple new scenes to the story, the most significant of which being an extended Psycho Mantis-induced hallucination. Fans of MGS2 will also be interested to know that Liquid Snake makes a brief mention of the notorious Patriots at one point.

Most of the dialogue has been cheesed-up quite a bit, and Snake seems more like a typical Schwarzenegger hero than the extremely complex character he truly is. One terrible line comes at the hands of Liquid Snake when he yells "This is like a videogame! A videogame I can't LOSE!" It's also very clear that Ashley Wood unfortunately used Twin Snakes as the reference for the action scenes. Ridiculous moments like Snake throwing the grenade down the barrel of Raven's tank are still there, which is sure to anger a few of the militant anti-Twin Snakes crowd. 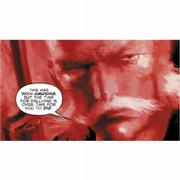 The best aspect of Digital Graphic Novel is definitely the extremely polished presentation and art style. It manages to take static images off the page and truly make them spring to life. Transitions from frame to frame are unique and fun to watch, and action scenes are brilliantly edited. It almost made me wish that Konami would release a fully playable remake of the original game using this art style. Familiar music from the original makes a return, and gunshots and other sounds are accompanied by onscreen "BUDDA BUDDA BUDDA" and "KABOOM" text explosions. This may sound silly, but it really does add to the comic-come-to-life feel. Unfortunately, the acclaimed voice acting from the original is completely absent, and the only actual voice you hear during the entire experience is Raven's laugh.

Being such a fanatic of the series, I appreciated this title while at the same time wished they would have included more details from the story. The MGS series is renowned as having the best story in videogames, and reducing it to standard action movie dialogue and brief action scenes really doesn't do it justice. Despite this complaint, it was still great to sit back and see one of my favorite stories of all time receive a completely new retelling in such a unique fashion.