Going over the significance of the Street Fighter series in gaming history isn't even necessary at this point. Street Fighter II will always be one of the greatest games of all time, and was hugely influential for fighting games in the years to follow. The Street Fighter Alpha series didn't quite get the mainstream success and recognition that it deserves. It takes everything that was great about SFII and added plenty of solid new gameplay mechanics.

All three of the core games have been faithfully replicated and control great on the PS2. These are old games, however, and certain aspects may irk less seasoned fighting game fans (one gripe I had was the lack of a move list during gameplay). This series isn't quite as easy to pick up and play as something like Soul Calibur. To truly get good at the Alpha series, be prepared to put in some serious commitment if you want to learn the more intricate nuances of the fighting engine. 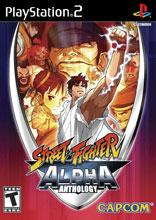 The most significant change to the SFII engine is the added super moves. A meter in the corner will fill up as you attack and take damage, and you can release a ridiculously powerful move when it's full. SFA3 included the "isms" to the meter, which gives you more options in terms of how the meter functions. Air combat and blocking is also much more present in the Alpha series than it was in the core series.

One of the only drawbacks of the Alpha series is that it features a cast of characters that are arguably less interesting than the original SFII clan. They're decent for sure, but I still find myself gravitating more towards Ken and Ryu rather than the newer characters. I did love the fact that they included a couple Final Fight characters and environments, however (nothing like the mayor/part-time pro wrestler Haggar cheering you on as you fight). The environments are full of life and feature locales as varied as the Colosseum and a swanky NY birthday party. As you enter the final boss stages of SFA3, there is a rainy forest level that is one of the most visually striking fighting environments I've seen.

Super Gem Fighter is the weak link of this collection, and really doesn't feel like it belongs. It features characters from the SF and Darkstalkers series, and everything is presented in a very Saturday morning cartoon style. The gameplay doesn't even resemble the Alpha games, and I can't imagine anyone spending too much time with this inclusion.

The Street Fighter series has always featured timeless visuals. I honestly don't even look at this game and think "wow, this looks old." I think about how great the art style is and how well-designed the characters are. All of the music is top-notch, and even features some remixes of SFII tunes. As you'd expect, no SF game would be complete without plenty of "Haduken!" and "Yoga Flame!" voice samples, and they're here in spades.

All three of the SFA games are fantastic fighting experiences, but I would have loved to see some semblance of added content with this title. Capcom's other collections included interesting videos and extras to complement the ports, but this one is extremely bare-boned. If that doesn't bother you, don't hesitate to drop the $29.99 for some classic fighting games.