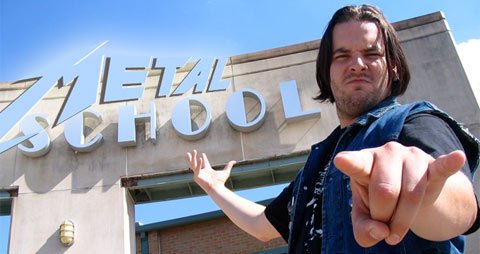 Mean Dean the Metal Machine - a.k.a. the Metal Professor, a.k.a. the Einstein of Metal - DJs weekly educational sets of his preferred genre.

If the University of Kansas ever opens up a "Professor of Metal" position, Mean Dean "The Metal Machine" Edington will be first in line. Credentials include: KJHK's longest running DJ of "Malicious Intent" program (note: not "founder," as we originally posted -ed.), serving a tour of duty with the venerable Relapse Records label, founding his own company Machine Management and seeing Metallica 23 times.

Edington teams with DJ Skullcrusher Cruz (Stevie Cruz of The Esoteric) and the Don of Metal (Don Akerstrom) to bring "Metal School" to the Replay Lounge patio every Monday night. "It's an opportunity to remind myself that it doesn't all suck," Edington explains. "I'm concerned about the kids learnin' them metals right." So grab a skull-eraser-capped pencil and join our podcast classroom as Professor Edington throws down the abbreviated history of heavy metal.

› Listen to the mp3 of the podcast

1. Black Sabbath "Paranoid" (1971)
Obviously we've got to start with Black Sabbath's "Paranoid." It's pretty much the first song that just about anyone learns. Maybe they learn "Iron Man" first; maybe "Smoke on the Water" Deep Purple-style first. But "Paranoid" pretty much brought Black Sabbath to the masses and brought them stateside and thus the image of heavy metal was born : They're pretty universally notarized as being the purveyors of the downtuned heavy guitar sound, wailing vocals, dark imagery kind of thing.

2. Motorhead "Ace of Spades" (1980)
I think that Motorhead kind of sums up that whole fence line of "Is this punk? Is this metal? Is this rock?" : Any punk rocker worth their salt likes Motorhead and any metalhead worth their salt likes Motorhead. Nobody sounded like Motorhead when Motorhead came out. It was faster and louder certainly than anyone had ever been before. Nobody is really constantly in Motorhead except for Lemmy, but that's pretty good for 30 years of making music : I'll always go see Motorhead live. I can't really say that newer Motorhead records really deviate from the formula, but the classic Motorhead is definitely where it's at.

A lot of people would say that The Misfits were more punk rock, but I really feel like The Misfits have inspired an entire generation of persons and spawned Samhain and Danzig when he went solo. They're pretty fierce. It was really raw and in-your-face, taking away the produced edge : I think everybody's done a Misfits song at this point. It's kind of mandatory to pay tribute : In metal circles, Danzig does in fact rule. The first three Danzig records are totally amazing. No one will ever say that Danzig had a more prolific or better career post-Misfits unless they're totally out of their minds, but the first several Danzig records are also crucial.

5. Metallica "Motorbreath" (1983)
Metallica played infinitely amounts faster than anyone before and with more fury. At the same time that L.A. was building this weird glam thing, this entire group of bands in the San Francisco Bay Area started to create what is known as thrash metal: faster and grittier than anything had ever been. They really fused the fury of punk rock with the technicality of the metal that had come before. Metallica now is what it is, but 23 years ago they were pretty fierce young people who wrote some of the best music of the last 30-40 years easily : Regardless of what anyone thinks of them now, they wrote records that made me survive my youth so I kind of have to stick with them.

6. Motley Crue "Shout At the Devil" (1983)
Simultaneously with the Bay Area thrash metal movement, there's this whole LA glam rock thing coming up that spawned huge hits all throughout the mid and late '80s : They're trying to be like, "Yeah, we're evil. But we wear makeup and dress like women." The first two Motley Crue records are great. I'm not going to say I don't rock some Poison ballads in my spare time : They're great songs and they're fun to play in the car. The girls like 'em too as evidenced by the number of females that request "Too Fast For Love" at Metal School every week.

7. Slayer "Raining Blood" (1986)
The thundering opening of this song is a war cry for almost any metalhead on the face of the earth. Slayer, in their time, was indisputably the fastest band that had ever existed and was so in-your-face and so over-the-top evil. Slayer fans would literally turn their backs on bands that would for open for them and just stand their with their Slayer back patches like, "We're here to see Slayer screw all the rest of you guys" : Slayer did in fact peak and now are not making the classic kind of records that they made before, but "Raining Blood" is indisputably one of most famous metal songs of all time : It's not so much fantasy scariness I believe (vocalist) Tom Araya described Slayer as "The Dark Cloud That Covers Society." They tend to speak about warfare and gruesome things that really happened.

8. Napalm Death "Scum" (1987)
Napalm Death is the ultimate in political-action hardcore/grindcore/death metal. Napalm Death at this point was slightly different than the band that continues to exist today, but they basically created what's known as grindcore which is an entire huge subgenre that's faster and grittier with uglier vocals. It was a very anti-capitalist, anti-corporate, anti-racism kind of statement that Napalm Death was making and continues to make. It was pretty much like, "Hey, we're all metalheads let's live together and do something nice with our world." Only not presented in such a Rainbow Brite kind of way.

9. At the Gates "Blinded By Fear" (1995)
The album "Slaughter of the Soul" I think is probably the perfect metal record : I don't think I've gone a day in my life without listening to this song. They kind of are the blueprint for 90 percent of the metal and hardcore hybrids that are going on right now ... I like to say that a lot of metalcore is just At the Gates without long hair or guitar solos. This record is so perfect that the band felt like they couldn't write a better album than this and broke up afterwards. And I totally agree. It took almost 10 years for people to realize that this record was so amazing and that they all wanted to play in bands that just play At the Gates riffs over and over again. People are like, "If you like At the Gates you'll like this" and I'm like, "No I'll listen to 'Slaughter the Soul' instead."

10. Mastodon "Crusher Destroyer" (2002)
They've put out the best music, I think, of any band since At the Gates : I feel like Mastodon are the Metallica of today. They've kind of followed a similar path, taking more of an independent label approach for their first two records. They just signed to Warner Brothers and are touring with Slayer and doing really high-profile stuff. I've been privileged to work with Mastodon pretty much since they started, and I really feel like they're going to give the world a swift kick. They're going to do for metal in the mainstream what Metallica did with "Master of Puppets" show people that it's not all pomp and poofy hair and girl jeans and crap like that that people like to buy into as metal these days.

Wow, now this is a seriously massive top ten list. I don't know who At The Gates are but apparently I need to find out in a hurry because the rest of this list is crucial. Brutal. Go Mean Dean.

i don't mean to be picky, but when you're talking about the founding of 'Malicious Intent', where's Neitch?

Actually, the thought that I founded Malicious Intent is a common misconception. While I am the longest-running host of the program, neither myself or my co-host Neitch founded the Intent, it was actually founded by a gentlemanly scholar named Drew Kennedy back in 1992.

After Drew hosted, the show went away for a year or so and was resurrected in '96 by Neitch and I came on board the next year in the fall.

Horns up to Drew and Neitch!