I Hate: Spending close to an hour on one of the Hard puzzles only to get it wrong

Sudoku has experienced a huge explosion in popularity over the last several months, and I'll admit I'm one of those that got hooked. With newspaper crossword puzzles, it was entirely possible to hit a brick wall once you've exhausted your trivia knowledge. Sudoku, on the other hand, could always be solved if you exhibit enough patience and logic. Some puzzles take 10 minutes, and some can take hours. Sudoku Gridmaster for the Nintendo DS moves the pencil-and-paper puzzler to videogame form, and it has its shares of plusses and minuses.

For those that have never played Sudoku, it would appear that the game involves math. Let me assure you that this is not the case at all. The objective is simply to fill a 9x9 square with numbers. It's divided into nine 3x3 squares, and each row, column, and box must include each of the numbers 1 through 9. If it sounds confusing, don't worry about it. Most people manage to pick up on it within five or ten minutes.

Several months ago, Sudoku first landed on the DS in the form of a Brain Age mode. This version was played by holding the system so the screens are left and right of each other, rather than the traditional top/bottom. The left screen showed the full grid, and the right screen could zoom in to individual squares so you could scribble in numbers. I loved the full Brain Age game, but I honestly probably spent more time with the Sudoku bonus mode. 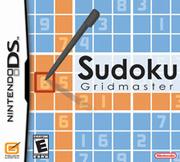 Because of my great first DS Sudoku experience, I was very excited for Sudoku Gridmaster. It's an entirely dedicated Sudoku title, and it features hundreds of puzzles of varying difficulty. The puzzles themselves are great (although it's admittedly difficult to screw up Sudoku), but there are some odd annoyances with the presentation.

Unlike the Brain Age version, Gridmaster presents the game in the standard DS fashion (top/bottom screens). The bottom screen obviously handles the input via the stylus, but it seems like the top screen has been neglected. The only thing it does differently than the bottom screen is eliminate some of the cluttered "possibility" numbers so you can get a clearer view of the grid. It's still entirely functional, but I much preferred the left/right Brain Age presentation.

Players have the option of using button inputs or handwriting to select numbers. Handwriting works alright, but I found it much less time-consuming and more convenient to use the buttons. One of the best features of this title is the way it highlights appropriate rows and columns depending on which box you select. It makes it so much easier to analyze what numbers are a possibility for the square you're looking at.

Each puzzle you complete will net you stars depending on how fast you finished it. The higher the difficulty, the more stars are possible to achieve. As you accumulate these stars and gain experience, you can unlock rank tests of various skill levels.

The actual cosmetic features of the game look fine (outside of the annoying top/bottom layout), but it would take a lot of work to make a grid and numbers look particularly ugly. Music fits the game perfectly, and is oddly calming. Fast-paced Dr. Mario/Tetris style music wouldn't work at all for a slower paced game like Sudoku, so I'm glad they went the direction they did with the audio.

Despite the annoying layout, Sudoku Gridmaster achieves its goal: To present fans of the game with a portable archive of electronic Sudoku puzzles. At $19.99, it's a definite bargain for a lot of replay value.