There is a shot in "Superman Returns" - literally - that is a tour de force at conveying the powers of a superhero.

A thief pulls a pistol on Superman (Brandon Routh) at point-blank range and pulls the trigger. In slow motion, the bullet goes directly into the hero's eye, where a close-up reveals the metal flattened like Play-Doh. A low angle view peering up at the men details the projectile falling harmlessly to the ground.

Sadly, filmmaker Bryan Singer's new cinematic version of the Man of Steel is a lot like that gunshot: It seems perfectly on target, but it doesn't make much of an impact.

The potential was certainly there.

Singer proved with "X-Men" and "X2" that he could manipulate one of the comic medium's top franchises with skill and respect. "Superman Returns" is rife with Singer's mastery of visualizing fantasy elements. Notice how finely orchestrated the sequence is where Clark Kent crash lands in Kansas - aside from the anachronistic mountains in the background, courtesy of Australia doubling for the location.

The director also concocts an engaging setup to the story (co-written with Dan Harris and Michael Dougherty). Superman has been gone for five years on a mission to explore the remains of his home world, Krypton. When he arrives back in Metropolis, he is stunned to find out reporter Lois Lane (Kate Bosworth) is living with a Daily Planet editor (James Marsden), and she has given birth to a son (Tristan Lake Leabu).

She's also nominated for a Pulitzer Prize for her essay "Why the World Doesn't Need Superman." 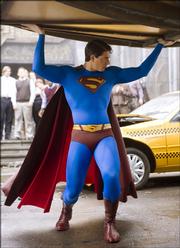 Brandon Routh plays the Man of Steel in "Superman Returns."

Can his X-ray vision cut through all that tension?

Meanwhile, arch enemy Lex Luthor (Kevin Spacey) has used the appeals process to get out of prison. His first matter of business is to raid Superman's Fortress of Solitude at the North Pole to gather technology he can use to thwart the hero, and to rearrange the geography of the world.

When a minion accuses Luthor of playing God, he disagrees: "Gods are selfish beings who fly around in little red capes and don't share their powers."

"Superman Returns" is at its strongest in its leisurely first half. Although thematically quite serious, there is an underlying charm to the production.

Yet by the time the third act lumbers onto the screen, it's apparent that all the potential exhibited by Singer's project can't hold the viewer's attention.

It's a bird. It's a plane. It's a downer. Superman (newcomer Brandon Routh) is the latest superhero given a brooding makeover. The style has been kind to shadowy, self-doubting characters like those of "Batman Begins" or talented director Bryan Singer's own "X-Men." However, this tone rarely complements the invulnerable Boy Scout.

That's because "Superman Returns" becomes overly sullen ... like in a "House of Sand and Fog" way.

The world of superhero movies has turned undeniably darker since Richard Donner's breezy "Superman" hit screens in 1978. The style has been kind to shadowy, self-doubting characters like those of "Batman Begins," the "Spider-Man" flicks and Singer's own two "X-Men." However, Superman is neither shadowy nor self-doubting, so this tone doesn't fit him at all.

Don't point fingers at newcomer Routh. He's fine in the role. At times he appears to be channeling the late Christopher Reeve during the bumbling Clark Kent scenes, but as "our greatest protector," he is convincingly heroic.

The other cast members are less inspiring.

Spacey seems to relish playing an arrogant bad guy, but he's no more memorable than Gene Hackman's original big-screen Luthor, or Michael Rosenbaum in TV's "Smallville" for that matter.

Maybe Luthor is too overused a character. Sure, there aren't a lot of choices in the Superman rogues gallery - certainly nobody to compete with those from the Batman or Spider-Man pantheon. Luthor is ultimately just a smart guy, which in comic book terms isn't all that interesting. (Note: Kevin Smith's unused draft of this tale featured Brainiac as the menace.)

The award for worst casting goes to Bosworth. Aside from the physical nuisance of the fair-skinned blonde trying to pass as a brunette, she's far too young for the role. At age 23, Bosworth is playing a character who is a major daily newspaper's lead reporter - and was so five years ago. Did she land that job while still in high school?

Perhaps the foremost problem with "Superman Returns" is the central figure himself.

Morally, he's a goody two-shoes with no possibility of turning to "the dark side."

Physically, he's simply too powerful. It's just really difficult to create a villain, a weapon or a catastrophe that Superman can't overcome with his bulletproof eyes closed.

Singer attempts to give the lone Kryptonian some vulnerability by pining for a nearly unattainable woman. That facet is probably enough to fuel a drama or a romantic comedy. But this is a comic book tale. If the hero can't potentially be conquered by a masked evildoer or his own internal shortcomings, how fun is that?

The answer is it's about as fun as "Superman Returns."

I thought the movie was very good, but not great! Lot's of action and suspence. I loved the original and I loved this one 2. It's worth a theatre visit, even if it is Southwind 12, where the seats are like rocks!!

As per the theater comment, come up to Legends. The seats are phenomenal and the prices, I believe, are about equal.

Honestly I expected much more. The problem like the article says is there is no tension when you make superman so powerful and morally apt. In all the other comics the heroes have moral issues or have to figure out how to use their powers in order to eradicate the enemy. In Superman, there isno such thing. Perhaps they should have let somebody die because Superman could not work his powers back after the trip or something.

On a side note: Can you believe that after such a bda movie, someone was playing the soundtrack at full volume in their car while tey were slowly leaving the theater on Wednesday? Yes, it was a man with glasses. Not superman but a nerd.

"Can his X-ray vision cut through all that tension?"

Superman can't cut through ANYTHING with his X-ray vision.

I'm not a comic book nerd, I'm a science nerd.

I think if Singer had stayed on for X-3 and they had gone with someone else for Superman I would've liked both movies better.

I agree with all the comments so far. One of the worst moves/miscasts in my opinion was Lois's new love, the actor who plays cyclops in X-men. While he's an adequate actor, you can't just switch superheros from one movie to another. If you're going to do that why not just make Christian Bale Superman, or Haly Berry Lois.

I think the biggest complain I have was the lack of background. No character development whatsoever for superman in this movie...sure, he's darn near perfect, but he still make choices. In this movie the script made him more Machine or God than man.

I'm also a devout christian and like christian themes (loved chronicles), but they way overkilled it in this movie.

As long as we're splitting hairs...

That aside, nice review. Helped me make up my mind between theatrical and rental viewing on this flick :)

While I respect Mr. Niccum's opinion, I have to disagree. As a big comic book fan (and Superman in particular), I found the film to be filled with warmth, compassion, and plenty of action, too. For another point of view, read my review at:

I commented on another post about this because I missed the story here -- sorry to repeat myself:

I find this movie a major disappointment. pt, you are right about the Christian stuff -- I felt the movie would have been better had it been set to music and titled "Jesus Christ, Superman." Spare me. I'm not trying to insult Christians or Christian-themed movies, just saying that Clark Kent shouldn't double as the son of God as he seems to do so here. Also, Lois was awful -- too young and unconvincing -- and she wasn't just nominated for a Pulitzer as Niccum notes, she won it! and was on her way to pick it up when bad stuff happens. Terrible film. Save your cash.

Well, hey, I liked the movie, even though it was kind of a mixed bag. I'll definitely agree that the portrayal of Lois was a mismatch in Bosworth, she really couldn't pull off a convincing Lois lane with the "indomitable woman" attitude, even if the character was now Mommy-tracked. But Brandon Routh did a really good job of pulling off Superman, and a decent job of pulling off Clark Kent. Spacey was probably the most impressively evil Lex Luthor of the set, much more dangerous and vicious than Gene Hackman's version.

I'm not all that religious, but the messiah references and the crucifixion imagery was a laying it on an bit thick (not to mention the hospital 'resurrection' and disappearance scene).

While it's true that superhero movies have been dark and angsty ever since Frank Miller totally changed the entire genre, this one was a quite a bit more upbeat than X-Men, Fantastic Four, or any recent superhero movie that's come along since Mr. Reeve's time.

Still, either way, it was better than Superman III, or even Superman IV :"The Quest For Peace", so I'll take it. If you're a Superman fan, it's a fun ride, and worth seeing on the big screen.