Climax's Moto GP series has landed on the Xbox 360, and it's immediately one of the most solid and beautiful racers on the console. While it doesn't offer a ton of improvements over the last installment, the beautiful visuals and excellent gameplay ensure that anyone who has ever enjoyed a racing game should take a look at this title.

Moto GP 3 was released less than a year ago, and GP 2006 certainly feels very similar. Then again, the controls and gameplay were already so refined, so I'd imagine Climax took an "If it's not broke, don't fix it" attitude towards this installment. The controls may seem basic (you'll mostly just work with A, LT, and RT during gameplay), but experienced fans of the title know how much skill is involved in any given race. When going around wide turns, it's good to use the rear brake to slide while still maintaining some speed. The front brake is better for short, tight turns that require more precision, and can also be used in conjunction with the rear brake. 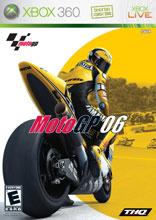 If it's your first time playing the series, it will definitely take a little getting used to the feel of the bikes. It's been a while since I played MotoGP, and I was immediately reminded of how precise you have to be. During my first race, I was wiping out and running off course all over the place. After a few spins in the training mode, however, it became second nature.

Upon starting a career, you can fully customize your bike and rider. A basic logo creation system is in place, so you can decorate your ride as much as you'd like. I decided to go all-out Evel Knievel, and the available customization easily allowed me to do so. The available customization isn't purely cosmetic, you can also fine-tune the technical aspects of your bike to your liking.

Grand Prix mode is the only initial career mode that's available, and it's more simulation than arcade racer. Courses are long and technical, and you'll be doing more precise turns than balls-to-the-wall speed sections. It wouldn't surprise me if many gamers get tired of the 6+ minute three-lap races, so it's good that they included a "lap number" option. As you progress through the courses, you'll be given ranking points based on your performance. On top of this, you'll also gain money and experience points. Money can be used to buy new bikes and parts, and experience points can upgrade your cornering, braking, top speed, and acceleration.

While the GP races are certainly fun, they don't offer quite as much excitement as the Extreme races. These take you off the sterile, professional courses of the standard circuit, and throw you into some more exotic locales. You'll be racing through cities, mountains and jungles, and all of these courses are far more speed-based. I used the front brake much less often in this mode, as the Extreme bikes allow you to be far more reckless and dangerous with your turns. These races feel markedly different than the GP courses. With the latter, it's possible to get far ahead and simply play it safe and cruise along. The Extreme courses are much shorter and more intense, so it's unlikely that you'll get a huge lead on the pack for the entire duration.

Xbox Live support has all the standards (player matches, ranked matches, etc.), as well as a couple somewhat unnecessary options like Stunt Mode. If you stick with the standard GP and Extreme races, it's an absolute blast most of the time. I never had trouble finding player matches, but ranked matches were a little more sparse. About 80% of the online races perform smoothly, but I ran into several occasions where opponent bikes experienced an odd-looking glitch that made it appear like they were jumping.

It certainly feels like previous incarnations of the series, but MotoGP 06 certainly doesn't look like them. This version takes full advantage of the power of the Xbox 360, and it's extremely apparent. Absolutely everything looks beautiful, from the road to the trackside distractions. Each course looks different from the previous one, especially in Extreme mode. There was more than one instance that I crashed because I was staring at something in the environment. Crashes look terribly painful, and the ragdoll physics are great. The only complaint I have with the visuals is the occasional framerate drop. It's not constant by any means, but you'll notice it on several turns.

Graphics aren't the only technical aspect that MotoGP 06 excels at. All of the sound is very realistic, and surround sound support only enhances that experience. It's great to crank up the rear speakers and hear your opponent's bikes fade behind you as you speed ahead. The soundtrack is mostly electronic music, and most of it fits the gameplay very well. I despise electronic music with every ounce of my being, but I admit it fits a title like this better than the standard Nickelback/Papa Roach crap that permeates so many racing games.

MotoGP 06 offers a ton of courses, plenty of unlockable bikes and reversed tracks, excellent racing gameplay, and a competent online mode. Longtime fans of the series will love the beautiful graphics, and newcomers will be blown away by how excellent the controls and physics are. Any racing fan with a 360 owes it to themselves to experience this game.