Metropolis, Ill. — Passing through southern Illinois on their way to Nashville, Diana Brown and her son Colin saw the signs pointing the way to this town's Superman Square and its colorful bronze statue of the Man of Steel.

Thanks to the media buildup ahead of Wednesday's opening of "Superman Returns," Clark Kent's alter ego was already on Brown's mind. So last week, mother and son got off the highway and visited this Mayberry-meets-Disney town on the Ohio River.

Off Interstate 24, midway between St. Louis and Nashville, this 167-year-old tourist lure has no real connection to the fictional crime-fighter beyond the coincidence of the name that Superman co-creator Jerry Siegel happened to choose when he first wrote the comic in the 1930s.

But three decades ago Metropolis adopted Superman, and now he's big business here - or as big as business can get in a town of 6,500 people across the river from Kentucky.

Nearly 10 times that many people turned out earlier this month for Metropolis' yearly four-day Superman Celebration, which dates to 1979 - the year after the first Superman movie starring Christopher Reeve was released. Attendance this year was up about one-third over last year, surely due to the buzz about "Superman Returns."

"It has certainly been a big help," says Clyde Wills, editor and publisher of the town's weekly newspaper, the Metropolis Planet, which was the Metropolis News until 1972 when it changed its name to echo the fictional Daily Planet where Clark Kent and Lois Lane worked. "Every time a new movie has come out or there was a new TV series or anything drastic happened in the comic books, it piqued an interest in our town." 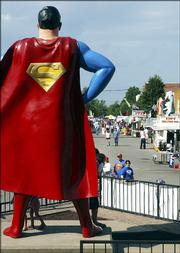 Superman's image appears on the water tower and billboards, leading tourists into downtown and a souvenir shop and Super Museum billed as "the Largest Superman Collection on the Planet," with 75,000 items on display.

The museum has props and wardrobe items from Superman television episodes and movies, plus displays that include Clark Kent's office as seen on TV in the 1950s. A mural on one side shows all the actors who have portrayed Superman.

Inside the store, the Superman theme blares across a wide collection of comic books and the typical tourist fare of T-shirts, shot-glasses and action figures.

Even before the arrival of "Superman Returns," the store was stocked with promotional items ranging from a stencil book with stickers to a water gun dubbed the "Superman Returns Shield Blaster," asking price $19.95.

Wills, the Planet editor, says the town's friendly persona won't change no matter how big or small a splash the film makes.

"We've tried to handle it in a very professional way and honor the superhero but, at the same time, realize it's a small town and not the Metropolis of the comics," he said. "We're going to be what we are and make it as enjoyable as we can."

The film didn't matter to Nancy Smith and her 26-year-old daughter, Heather. While the Atlanta women were St. Louis-bound recently, Metropolis' allure was just too great to resist.

"It looks like every quaint small town," Nancy Smith, a first-grade teacher, said as her daughter emerged from the souvenir shop with keepsakes - a little Superman piggy bank and a tiny telephone booth.

"It's so cool," Nancy Smith said of the town. Then she smiled and added, "Cheesy, but cool."