Does the next-gen boxer put up a fair fight?

Funniest visual: The Burger King accompanying you to the ring

With its then-new Total Punch Control system, the original Fight Night became the best boxing game since Mike Tyson's Punch-Out. Fights were virtual chess matches (albeit with more face-punching), and the series featured some of the most detailed character models ever seen on a console.

Round 2 introduced the haymaker punch, which was a blast to pummel opponents with. Unfortunately, this haymaker was far too easy and devastating, and fights between two experienced players became back-and-forth haymaker volleys. Fight Night Round 3 for the Xbox 360 vastly improves upon the already-great visuals, but doesn't feel like a true sequel thanks to mostly unchanged gameplay mechanics. 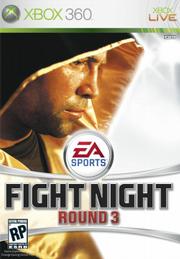 While a good amount of gamers prefer this setting, others may opt for one of the other settings that allow the face buttons to perform punches. In this case, X and Y perform left and right hooks, and A and B perform straight jabs. All of the other functions are switched to the D-pad. The right analog stick will cause you to bob and weave or block, depending on the trigger button you're holding in.

The entire preceding paragraph about Round 3 could be copied-and-pasted into a review of either of the previous two titles, and it would still ring true. Gameplay feels almost identical to the other FN games, and the formula is starting to grow slightly tiresome. The best tactic is to wait for an opponent to throw a punch, and attempt to block at the correct diagonal to parry it. At this point, you'll have the ability to counter with a haymaker or a quick punch combo.

After this is over, it's back to square one. Granted, you can try to mix up your fighting style, but this method tends to be the most effective. Simply throwing punches randomly will be met with parries and blocks from the AI, so it's best to be on the defensive. This makes almost all of the early fights ridiculously easy, as the dumber AI opponents have a tendency to telegraph where the punch is coming from long before it arrives.

New to Round 3 is the new KO Punch and Stun Punch. The KO punch instantly drains your opponent's health bar, and is performed by pulling the stick farther back than you would for a haymaker. If you land one successfully, it can turn a fight around in the blink of an eye.

I wasn't as big of a fan of the Stun Punch, which puts your opponent in a first-person minigame in which they attempt to block your punches. Both of these punches have long animation times, so don't expect them to work often against experienced online fighters. Haymaker punches have also been slowed down to make them less of a crutch than they were in Round 2.

Career Mode was never terribly in-depth in the previous games, but it's even more bare-bones in Round 3. It's a neverending cycle of "Sign Contract, Train, Fight" that gets old extremely quick. The training minigames are so basic and monotonous that you'll want to skip them after the first time you do them. Unfortunately, auto-training is less effective, so you'll have to endure the load times and inane training games if you want to get the best stats for your fighter.

Create-A-Champ is almost identical to the previous game, and doesn't feature a great deal of customization outside of facial structure. You can buy new shorts, gloves and various accessories, but the menu system for the Fight Store is poorly organized and clunky.

Thankfully, most of these complaints leave my mind when I load up a two-player bout. It's then that Fight Night transforms into one of the better two-player sports game experiences of recent memory. You don't have to deal with underdeveloped A.I., just you and a friend slugging it out. Xbox Live play is lag-free for the most part, so you can battle opponents from around the world when you eventually tire of the Career Mode.

Fight Night Round 3 completely delivers on the promise of true next-generation visuals, and I'd be willing to say it looks better than any game currently available for the 360. Character models look absolutely identical to their real-life counterparts, and you'll want to watch the face-rippling replays again and again.

I've played this game with several of my friends, and more than one of them exclaimed something along the lines of "Am I actually controlling this? Holy ****!" when the fight started. These visuals make me extremely confident in the graphical potential of the Xbox 360. If it looks this good within a few months of the system launch, one can only imagine what the later-generation games will look like.

Sound effects are solid, but obviously don't have the "wow" factor of the visuals. Crowd noises, grunts and punch effects all sound realistic. The announcer does have a tendency to repeat himself very often, however (I was ready to deliver a haymaker to my 360 if he compared the Philly Shell defense to a Philly Cheesesteak again).

In the end, I feel a purchase recommendation is in order for Fight Night Round 3. While I certainly have my complaints, the multiplayer makes most of them a non-issue. Not to mention it's a great showpiece for the 360 when you have friends over. Even if you're not a huge boxing fan, give this one a shot. If you're new to the series, go ahead and purchase this immediately if you want the best boxing simulation available.