Good: The deepest Soccer Sim out there

When you think sports games there's probably one developer that immediately comes to mind: EA. But Konami and its excellent Winning Eleven series is working to change that. With the release of the newest game in the franchise, The Winning Eleven 9, Konami set a new standard for immersive gameplay in a soccer title.

Already a big hit in Europe and Japan the Winning Eleven series is known for its remarkable level of realism and attention to detail. If anything, this is a soccer game made for soccer fanatics. In a given match it's possible to alter line formations, have your players mark individual opponents, set automatic and manual strategies, set players directions for zone coverage and even set a player's level of aggression for both attacking and defending. In fact, there are so many options available that it begins to be overwhelming, especially for casual sports gamers.

If you are an avid sports or soccer fan then the rewards of Winning Eleven 9 are huge. Aside from the level detail the game also features an intuitive control scheme as well. Rather than assign a specific button for each feint, many of the moves are accomplished through manipulation of the D-pad or left analog stick. A quick tap in the opposite direction causes the player to stop movement or quickly shift his momentum to evade a defender. This is intuitive, but at times it can lead to undesired results. Several times I kicked balls out of bounds or into the possession of opponents while trying to evade. The system works, but could benefit from being a tad more responsive. 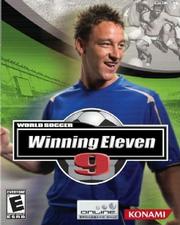 Another innovative control feature is the ability to precision pass with the right analog stick. Normally passing is accomplished by pressing the direction of the desired receiver and the appropriate pass button (normal pass, lead pass and lob pass). Precision Passing allows you to put the ball wherever you want by hold the right analog stick in the direction of you receiver and simply pressing analog stick's built-in button. It's a nice idea, but it's hardly ever useful. The game's conventional passing system works just fine so it's best left to advanced players and control freaks.

The game features the prerequisite list of modes. There are exhibition and quick matches, a variety of training modes and Cup tournaments. Master League Mode, Winning Eleven's version of Career, is what most players are likely to devote the majority of their time.

Like the rest of the game Master League Mode is extremely detailed, allowing you to completely manage your team. At the outset you're allowed to choose between the actual team roster and a fictitious one created by Konami. Each has their own advantages and disadvantages. True-life rosters are often better than their fictional counterparts, but older players will decline and eventually retire. Konami's own roster features players of lesser skill, but they often have longer careers and show more improvement over time.

In Master League Mode it is possible to run through practice formations, draft and sign new players, play an entire season and even bring in your own created players. Unlike most managing modes Master League can actually come to end if you fail to have minimum number of players recruited, if you lack the funds to cover the expenses of a professional team or if your skill points reach zero from poor play. This mode does a fantastic job of justifying core managerial decisions by balancing performance aspirations with financial limitations.

The best thing about Master League Mode is that it rewards you based on the quality of your team. Play well and it's possible to advance rank and get invited to better tournaments and gain better funding for your club. The downside to this is that if you choose a weak team in hopes of creating a Cinderella story you'll have to work extra hard to keep your season from ending due to insufficient points and team funding.

Also, players naturally go through a bell-curve effect in which they gain skill, reach the pinnacle of their career and then decline into mediocrity. The speed in which they go through this cycle is dependent on how much playtime they get per match. This is another great feature that helps promote playing with more than just your starters.

The only real addition to this year's Winning Eleven is the inclusion of online play. European and Japanese players have been enjoying the dedicated online community for awhile now, but now that it's available for US gamers what can we expect? Well, not much, unfortunately. Winning Eleven 9's online mode features only one online mode (match) and no voice support for the PS2 version, just text chat. It's possible to start a match via Optimatch, Quick Match or you can create your own match and invite an opponent from the lobby. It's also possible to bring your Master League team online. The game did suffer from a few isolated periods of lag when I played during peak hours, so consider yourself warned.

Probably the biggest reason the Winning Eleven series has gone noticed on US shores is the lack of a complete FIFA license. The worst thing about this is the inconsistency of licensed teams versus unlicensed teams (fans of the Arsenal or Chelsea are in luck, but for some reason Manchester United supporters are in for a disappointment).

Konami understands this frustration. Good thing, they included the all-powerful Edit option. While they may not officially condone this, the Edit option allows you to change anything about a team. From individual player statistics and names all the way to jersey colors and team names. Unfortunately, if you want a perfectly accurate roster for all teams you're looking at a minimum of three hours of tedious editing to achieve this.

Visually, the series could use some work. Textures are clean and the framerate is smooth, but the players could benefit from a few more facial expressions (they all suffer from the 1,000-mile-stare) and the crowd is so pixilated and flat that it reminds me of the PS1 days.

Aurally, the game sounds great. The commentary is fresh and the crowd noise is realistic, especially on a surround sound system. The weird, peppy techno music feels a little out of place during menus and loading screens and the song for the Online Lobby sounds like it belongs in an elevator, not a Soccer game. Maybe it's a European thing.

Nitpicking aside, the main issue with The Winning Eleven 9 is its immersive gameplay. While it's a great commitment to quality it can also be more than a little overpowering to the casual sports gamer. Often racing games like Gran Turismo or Forza offer the choice between arcade and simulation. It might be nice if the Winning Eleven series had this option too. Otherwise fans of the series, sports and especially soccer will foam at the mouth from the number of options and the level of control this game provides.

Bottom line: If you watch or play soccer, subscribe to the soccer network or have plans on taking a World Cup tour before you die, buy this game. You won't be disappointed.