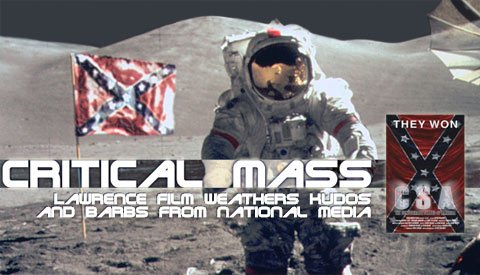 "Leagues deeper than a one-joke goof."

"A sophomoric film essay that would have barely rated a passing grade from a tougher teacher."

"The first great American film of the year."

"Anyone can spin such fascinating 'what if' scenarios, but few could reveal such a visionary imagination or cutting wit as filmmaker Kevin Willmott in 'C.S.A.: The Confederate States of America.'"

While Lawrence-based Willmott's film enjoys its official hometown premiere Friday, the picture already started playing around the country during the last few weeks. The speculative piece - which dramatizes the repercussions that might have followed had the South won the Civil War - has screened in more than 50 cities. As such, opinions vary wildly about its merit.

"As a whole, the critics we really wanted to like and get behind the film have all done that. There are a few in the middle who can't quite figure it out," Willmott says.

"The people who have really panned the film have all panned it for the right reasons. There's always an implication in the things they say that they just don't like the America I'm showing them. Then they SHOULDN'T like the film. They're criticizing my take on it all. They're criticizing, 'I wish somebody else would have made this film in a different way.' That's pretty indicative of the subject matter."

Lawrence filmmaker Kevin Willmott envisions an America in which the South won the Civil War and slavery continues into present-day society. The project is presented as a mock documentary aired on C.S.A. TV, which allows for faux ads and other programming to share the screen with historical speculation.

The movie initially screened at the 2004 Sundance Film Festival and was bought by IFC Films. The studio experimented with a test release in a few Southern cities last fall but decided to unveil it nationally to coincide with Black History Month in February.

"The Entertainment Weekly piece served as a spur in some ways to IFC," says "C.S.A." producer Rick Cowan. "Suddenly IFC was getting a lot more phone calls about our movie."

The film gained more allies from publications such as The Los Angeles Times.

Kenneth Turan wrote, "'C.S.A.' is rough around the edges, especially where the acting and some of the film's invented characters are concerned. But the way 'C.S.A.' works out its ideas is so provoking that its drawbacks are not difficult to ignore."

On the flip side, other major publications denounced the picture.

Manohla Dargis of The New York Times wrote, "While the filmmaker's anger is palpable, it's not very inspired. (Riffing off such exhausted conceits as fake documentaries and commercials doesn't help.)"

"A lot of critics find the need to praise the film, but they have to take that paragraph to say something negative about it," Cowan says. "One of the biggest hits that we've gotten is, 'It's definitely a home-made film. It's a low-budget film, and it shows.' Well, yeah, when we took this thing to Sundance we had $35,000 into it. I'm not going to disagree with you that it doesn't look like a $60 million studio movie."

'Are you laughing yet?'

So far, the response by the national press has been overwhelmingly favorable. It's sitting at 84 percent positive on the website rottentomatoes.com, which tracks critical response to films. On the Internet Movie Database, it's ranked a seven out of 10 by readers.

Even so, Cowan says, there are some journalists who simply don't get it.

"I had one reviewer (David Wildman) in Boston that I swear must be a slaveholder still," he says, laughing. "He was cruel. Not about the filmmaking techniques, but he was cruel about the subject matter of the movie. He listed a bunch of the scenes in the movie and said, 'Are you laughing yet?'

"I wanted to use 'Are you laughing yet?' on our poster."

Cowan admits he spent the last bit of company money on hiring a public relations firm separate from IFC to try and take the film to a different level of coverage than just reviews by daily print critics.

He says, "I really feel like the film needs much more national notice. I need Charlie Rose. I need Anderson Cooper. I need to move from entertainment to op-ed."

So far Willmott, an associate professor of theater and film at Kansas University, has made the rounds on more wide-reaching stages. David Lee Roth interviewed Willmott on his syndicated radio show. The former Van Halen singer admitted he went back to see the film a second time because he found its central conceit made him re-evaluate the whole topic.

"Elvis Mitchell uses the film in a class he teaches at Harvard," Willmott says. "He doesn't show 'Birth of a Nation' now. What he'll do is show a clip of it and show some of 'C.S.A.' That was one of the best things I've ever heard anybody ever say."

Regardless of whether the reviews have been glowing or dismissive, on-target or off-base, Willmott says none of what he's heard has made him want to go back and alter any part of his signature production.

"If anything, it's really confirmed everything I believed," he says. "The difference between what we do and what Hollywood does is they say, 'Oh, there is somebody over here who is offended by this. You need to change that. There are some people over here who don't understand this. You need to change that.' What 'C.S.A.' says is, 'If you don't understand this right now, well, keep trying until you figure it out.' It says, 'If you're offended, keep thinking about it and eventually you may understand why you're offended.'"

Willmott and Cowan expect "C.S.A." to continue to play in more theaters and gain momentum along the way. The film also will start appearing as part of a Comcast video-on-demand package at the end of March.

No word yet as to when it will find additional life on DVD. But Cowan, who just recorded audio commentary for the disc, hopes he can put that off as long as possible so "C.S.A." can develop an audience in theaters.

"Critical acclaim was never my concern," Cowan says. "Finding a way to get people's butts in the seats was always my concern."