Inside the wide halls of Kansas University's Spencer Museum of Art, the vision of Gordon Parks looks out onto the world.

The late Kansas-born artist's work has hung in this section of the museum for a month. But now, just days after his death, the collection of signed photographic prints suddenly carries new weight.

When the foundation honored Parks, it did so with eyes toward the future.

"... At the age of 93, he is not yet finished writing, photographing and living," the foundation wrote at the time. 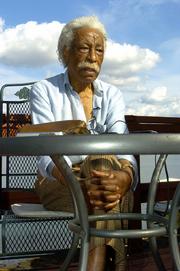 Knappe thought the same thing. The museum is proud to own the collection, he said. The honor grew, Knappe said, when he realized the collection would give people an opportunity to say their goodbyes.

People have been stopping by after hearing of Parks' death. The Fort Scott native is well-loved in the area, he said, and the collection, which spans decades, serves as a special tribute to the man Gov. Kathleen Sebelius recently called an "incredibly talented Kansas Renaissance man."

Parks spent much of his time as a photographer trying to capture issues of race and poverty in America, using "art as his weapon to fight discrimination," Sebelius said.

An exhibition of Gordon Parks' photography is on display at Kansas University's Spencer Museum of Art through March 19. The exhibit, "Gordon Parks At Home and Abroad: A Small Selection," is in the Study Gallery on the fourth floor of the museum. Parks, a celebrated Kansas photojournalist, author and filmmaker, died Tuesday. He was 93.

The collection at the Spencer reflects exactly that. The photos capture the faces that, either in the limelight or the lowlight, embodied racial struggles.

The halls of the Spencer Museum were fairly quiet Wednesday afternoon. Parks' photographs hung in a small space that connected two larger displays on the museum's fourth floor.

But in the hall, the faces in Parks' photos stared out, eyes vivid - Malcom X, Mohammed Ali, average Kansas farmers and New York City street workers, staring out at the world Parks captured and saw so well.