Beginning with his film debut in 1989's "Powwow Highway," Wes Studi has followed a career path that has led him to become one of the most successful American Indian actors working in Hollywood.

Whether playing the fierce warrior Toughest Pawnee in the Oscar-winning "Dances With Wolves," the deadly Magua in "The Last of the Mohicans" or composed Detective Casals in "Heat," Studi has collaborated with some of the industry's most renowned stars and directors.

The 58-year-old actor's most recent role came in last month's "The New World," opposite Colin Farrell and Christian Bale.

Although audiences are likely familiar with his dozens of TV and feature film efforts, they might not know that Studi also is a bassist in a band called Firecat of Discord, a published children's book author and a Vietnam War veteran.

The Oklahoma native will travel to Lawrence for the first time as a headlining speaker of this weekend's Stories 'N Motion Film Festival at Haskell Indian Nations University.

Q: What film role do most people associate you with?

A: Either the (Tony) Hillerman mysteries on television or "The Last of the Mohicans."

Q: Although most of your movies are dramatically serious or action-oriented, you've also done comedy. Is The Sphinx from "Mystery Men" a type of role you'd like to do more of?

A: Actually, I would. That was a good film to work on. To work with a bunch of comedians was a new thing for me. I learned from most of the comedians that being funny is serious work. Most of the guys do work a lot on what makes something funny. They all try out their comedy on one another. If you ever do get a laugh, it must be pretty good.

Q: Do people come up and quote lines from "Mystery Men" to you all the time? 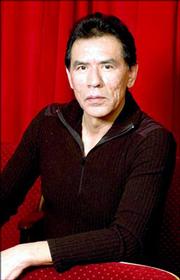 Q: What's your favorite to quote?

Q: What's been your most enjoyable experience working on a movie?

A: My most enjoyable moment is when we get the word that everything is greenlighted and we're on the way to shoot.

Q: Has Hollywood improved in its portrayal of American Indians since you first got involved in the industry?

A: When I got involved in the industry was when they were making an effort into putting some character into Indian roles that were available. With the coming of "Dances With Wolves" and the audience reaction to the fact that they got to see the actual lives that occurred amongst the Native American characters, that reaction was positive. And it led to the creation of more stories that had more involvement with the everyday life of the Indians. That was a turning point in the '90s. It also happened back in the '70s with films like "One Flew Over the Cuckoo's Nest" and "The Outlaw Josey Wales." Those were 20-year cycles. I guess now we're waiting on the next one.

Q: Do you ever turn down a role because you don't like the way it portrays your heritage?

A: I'll turn it down if production is not receptive to doing a little tweaking to modify the role where it isn't derogatory of us. I'm not offered many parts like that, though. Therefore, I haven't turned down that many.

Q: You grew up speaking Cherokee as your first language. Do you find many opportunities these days to speak it?

A: I just did a narration of a Trail of Tears documentary that was done this past summer. I used only the Cherokee language. We added an English-speaking narrator, James Earl Jones. It was certainly useful then. Otherwise, where I live in New Mexico it's kind of hard to find a Cherokee Indian in the area. There's always the telephone I can use to call somebody.

Q: I understand you were quite active in AIM (American Indian Movement) during the 1970s. Were you at Wounded Knee?

Wes Studi appears as the title character in 1993's "Geronimo: An American Legend," which he will screen tonight at Haskell Auditorium.

Q: Looking back on that era, what was the greatest accomplishment to come out of those struggles?

A: What that era did for Indian people was it reawakened an identity that we could be proud of. There were some wrongs to be righted. It was a time where we could stand arm in arm and demand the government and the people of America pay attention to our grievances from the past, as well as to work on the issues of that particular present. It hasn't changed from that point. We've just had many more people involved in the struggle, and knowing that the struggle can be successful. The sovereignty status we enjoy today would simply not exist were it not for that particular era's movement.

Q: What projects are you working on now?

A: We're talking about doing a prequel to "Lonesome Dove." It's called "Comanche Moon." We're in talks for that, as well as for a film coming to New Mexico that is sort of a sci-fi/horror film.

A: The best advice I ever heard about making films is don't invest your own money. And it's OK to be a tough guy onscreen. But it's not that lucrative a situation in real life.