Formulaic Onimusha-ness only lasts so long

Bad: Can get repetitive at times, some annoying puzzles, partner AI

Weirdest Character: Minokichi, the little guy that lives in an upside-down vase

By the time a series reaches its fourth installment, one would hope that enough updates and improvements have been made to necessitate it. Many games run out of useful additions and instead throw in useless or unimpressive new features (skis in SSX On Tour, traffic checking in Burnout Revenge, etc). Onimusha: Dawn of Dreams manages to avoid that mistake, adding several very good aspects to the series. In this installment, players can choose between five completely different characters, and level all of them up with the large amount of customization available.

You'll start the game as Soki, a general badass that gets introduced in dramatic fashion with the first excellent CG cutscene. These cutscenes occur regularly throughout the game, and the pre-rendered ones are fantastic. Those familiar with the gameplay in the Onimusha series will feel right at home here, although it now features noticeably more action. As before, three different colors of orbs can come out of vanquished enemies. Red orbs are essentially experience, blue orbs are magic and yellow orbs are health. 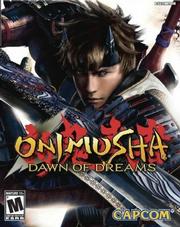 While it's nice to replenish health and magic from time to time, the red orbs are the ones that will really improve the gameplay experience. That's because you can infuse your weapons and armor with them when you approach one of numerous Enchanted Mirrors. There are countless weapons for each character, and most will yield special results if you level them up to a predetermined level. For example, Soki's initial sword will add to your max HP and MP if you get it up to the higher levels. Some weapons have special strengths, such as being doubly useful against certain types of enemies. The other upgrade system revolves around skill points. You can use these to teach your characters new actions and attacks, as well as increase the general power of them.

Boss fights occur with great frequency in this title, and that's a very good thing. The large majority of these clashes are of great quality, and many of them will take multiple attempts as you learn their attack patterns and weaknesses. Most are well designed battles, but there is the occasional exception, such as the fight with Ohatsu. The battle takes place in a square area filled with trees. You have a sword, and Ohatsu has a rifle. It's best to take cover behind the trees and then jump out and attack when she's done firing. The problem is, there are so many trees in the area that it's extremely difficult to slash at her without your sword clanging against the tree, ending the attack prematurely. Luckily, annoyances like this are the exception rather than the rule.

There are many times where you will be accompanied by one of the other five characters. In these instances, you can issue basic commands to them using the d-pad. If you want them to go on an offensive rampage, you can do so with the press of a button. If they are nearing death, you can have them sit back and recover 50% of their health. Unfortunately, the AI on your partner seems a bit underdeveloped, so get used to babysitting them a lot of the action gets too overwhelming. The occasional puzzle pops up in the course of the story, but not quite as much as previous entries in the series. I almost wish they were omitted entirely, as they're not very interesting for the most part.

Everything is wrapped up in a great package for the eyes and ears. I've already mentioned the high-quality CG cutscenes, but the realtime graphics are quite impressive as well. Particle effects and well-designed characters are all over the place, and the soundtrack is top notch. Some tracks even have an old-school Capcom feel to them, sounding almost like updated Mega Man tunes. Every slash, magic attack, and enemy yell sounds perfect. It's too bad the voice acting couldn't provide as much polish and quality.

Onimusha: Dawn of Dreams spans two discs, and should take most gamers over 20 hours to complete. Considering how much customization is possible, there is a massive amount of replay value to be had. Plus, you can revisit completed stages with different characters to gain access to previously unavailable areas. Even with the huge amount of customization, the standard enemy battles start to get a little repetitive after several hours. Thankfully, the boss battles and upgrade system make this title worth checking out for Onimusha fans.