The classic gets a beautiful face lift

Bad: Playing as the bosses, some slowdown, boss A.I.

Cutman: Still has scissors on his head

I've always thought that the Mega Man series pumped out games like none other, and the fact that this is my third MM review in under two months definitely supports that theory. Granted, one of them is a collection and the other two are updates, but it proves that this classic series can still make money for Capcom. A remake of the classic original NES game, Mega Man Powered Up features two new bosses, as well as updated stages, a level creator and the ability to play as all of the evil robots.

Anyone who has ever played a Mega Man game should be instantly familiar with the gameplay formula. You select one of eight levels, and blast and jump your way through until you reach the evil boss robot. After a boss fight, you gain their power and work your way on to the next stage. A crucial part of playing through these games is defeating the bosses in the right order, as each has a certain Achilles heel that another boss ability can exploit. Unfortunately, the boss A.I. in this game seems a little dumbed down in comparison to the original. 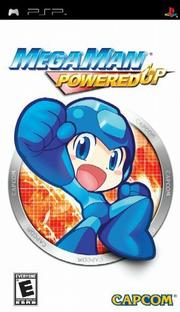 There were several instances in which I fought a boss that just stood in a corner and threw his projectiles over and over. I barely had to jump or dodge, I simply stood on the left side of the screen and shot. Despite this, the two new bosses (Time Man and Oil Man) are both quality fights and fit right in with the style of the game.

MMPU has three difficulty settings, and each of them is noticeably different than the other. For instance, on Easy, difficult jumps are made far simpler with the addition of special blocks to jump on. Once you get to Medium or Hard, these disappear. Playing on the harder difficulties is rewarding, as they are the only settings you can find hidden items on. In addition to all the "new style" stages, there are also direct remakes of the original NES levels.

As you play through, you'll unlock the various bosses as playable characters. This sounds like a good idea, but ends up being very underwhelming in action. First off, Mega Man eventually gains the abilities of all these characters, so it's not anything new to be able to shoot ice as Iceman. Not to mention, Mega Man's arm cannon is a better rapid-fire projectile than any of the boss abilities. Being Bomb Man and only being able to have two bombs onscreen at one time is far less effective than being able to quickly blast with Mega Man. When you play as a boss, your own stage is removed from the select screen and replaced with the "Mega Man?" impostor.

The hidden items you find in the Medium and Hard difficulties can be used in the stage creation mode. While it may be a fun distraction for Mega Man enthusiasts, it's too time-consuming and complicated for your average gamer. Creating a stage filled with interesting platforming segments and good enemy placement is a true commitment and the payoff isn't there.

Another bonus feature is the challenge mode, which presents you with 100 unique challenges to play through as all the different characters. Some are pure platforming, and others are situation-specific battles. Some of them are extremely difficult and can take several attempts to clear.

All of the stages and characters have been given a complete visual makeover, and it looks great. Animated backgrounds, boss characters and enemies all have a whole new look, while still being faithful to the basic design of the original. Little details are present, such as when characters become visually exhausted after taking too much damage. The only downside is some minor framerate hiccups, usually when animated projectiles are thrown (a robot that threw a pickaxe always seemed to slow the game down for some reason).

All of the original tunes and sound effects receive the same upgrades as the graphics, and they're similarly improved. The soundtrack was excellent 20 years ago, and it's still excellent now. All of the bosses talk now, and some sound hilarious (Fire Man sounds like a Southern Baptist televangelist for some reason).

Fans of classic Mega Man games will surely appreciate the upgrades Capcom has made with this remake. When all is considered, this version is actually more fun than the original. It would have been nice if they implemented some of the later Mega Man abilities (charge shot, slide, etc), but it's fine as it is. Definitely worth checking out for fans of action/platforming gameplay.