Before Stephen Johnson made a living at art, he made a point of living at the Lawrence Arts Center.

Not literally, of course, but he spent many hours there while growing up in Lawrence. Back then, the center conducted business from the Carnegie building at Ninth and Vermont streets. Johnson took life drawing classes there in high school, returned for training in watercolors during his time at Kansas University and later taught painting there before heading off to New York to live the artist's life.

"I was always looking for other ways of learning how to do things," he says.

Now that he's made a name for himself, Johnson makes a habit of giving back to the organization that helped feed his youthful creativity by donating a piece to the Lawrence Art Auction each year. This time around, he's the featured artist.

"Basically it's a way that we honor artists who have been involved with the arts center for many years and who are prominent artists," gallery director Rick Mitchell says of the distinction. "He's taken classes here, he's taught classes here, he's been a contributor to the art auction ... he comes to events here, his children do things here. He and actually his whole family have been involved at the arts center for many, many years."

Johnson's drawing "Hoops Players" will be sold during the live auction on April 8 at the arts center, 940 N.H.

Stephen Johnson is the featured artist at this year's Lawrence Art Auction. He donated a drawing originally intended to be the cover of "Hoops," a basketball book he illustrated for author Robert Burleigh. The piece will be available at the annual fundraiser for the center's gallery program on April 8.

More than 750 people are expected to attend the annual fundraiser for the center's gallery program to bid on 236 works donated by nearly 240 artists in both silent and live auctions.

Jack of all trades

Johnson struggled with what to donate for this year's event. That may be because he doesn't limit himself to a single medium or style.

He has done commercial illustrations for national magazines, created award-winning artwork for children's books, designed a glass mosaic mural for a New York City subway station, adorned canvases with nude figure paintings and earned commissions to design abstract sculptures for the Lied Center and the city of Lawrence.

Johnson finally settled on "Hoops Players," and the piece has an interesting story. Originally created for the cover of the 1997 book "Hoops," which Johnson illustrated for author Robert Burleigh, the drawing's orange background didn't suit Johnson's final vision for the book. So he redid the drawing on a red background but kept the original.

"This one has some really nice marks, just the way the figures came together," he says.

Johnson is aware that some Lawrence artists object to the idea of art auctions because of the possibility that work could be sold for less than its retail price. But he continues to donate because he sees value in what the center offers area artists.

"They're really the outlet for continuing education in the arts," he says. "And the auction also provides some degree of exposure. One gets into collections that way, which is nice."

Johnson himself began collecting work by a Lawrence landscape artist after spotting one of her paintings at the auction in the 1990s.

"It was somebody named Lisa Grossman," Johnson recalls, chuckling because Grossman has since become quite well-known. "I wasn't able to attend the auction, but I had my sister bid on it for me, and I got the painting. Then I started trying to figure out who she was. 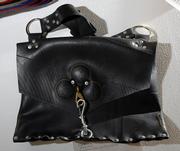 "I've gotten to know her and love her work, and I ended up buying a piece from her gallery in Manhattan."

Mitchell says the arts center encourages similar relationships by hooking up auction artists with patrons who want to know more about their work. The auction catalog provides contact information for either the artists or the gallery that represents them.

Other perks for donating artists include a free Web page for a year, a free membership to the arts center, two auction tickets, a certificate for one arts center class and the option to receive 25 percent of the selling price back to cover costs.

"The auction continues to grow," Mitchell says. "We know that means we're selling lots of work, and we know that we owe something back for that."

Unlike Johnson, longtime auction-goer Maria Martin says her taste skews too eclectic to buy works by the same artist year after year, but she hasn't missed an auction since she and her husband, Don, moved to Lawrence in 1984.

She comes for nostalgia - she grew up in a household that smelled of paint from her father's studio - and to champion the city of the arts.

"There's just incredible talent out there, just right in our own community," says Martin, owner of Southwest and More, 727 Mass. "I think people should support our artists and the art that we have within Lawrence."

Nancy Parker feels the same way. She and her husband, John, have frequented the gala off and on - mostly on - for 15 years. The Lawrence couple always buy at least one piece.

"I love the art auction," she says. "You can get great art and support local artists."