Does the expansive and deep Prime universe make the grade on the DS?

Bad: Some reused rooms and bosses, deathmatch only MP mode if you have no friends

Metroid Prime is critically one of the best video games of all time. With its unique blend of action, ways to uncover the story, feeling of solitude, original boss battles, spot-on control and the best environmental puzzles bar none, it beautifully articulated the storied 2D franchise in 3D. With the DS's Metroid Prime: Hunters, Nintendo took on the daunting challenge to replicate those elements enough to maintain that "feel" on the less capable hardware and less spacious media.

It worked, meaning the "feel" was replicated, but not necessarily the depth due to the limitations of the DS media. Regardless, replicating that "feel" is a significant accomplishment, especially considering the lukewarm reception of the demo everyone played one year ago. 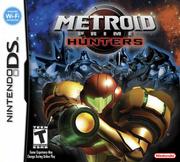 The Alimbics are a mysterious race that left behind artifacts when they disappeared. Samus and the Federation are responding to an obscure communication that suggests the key to ultimate power lies in the Alimbic Cluster. Samus's mission is to find this power before it falls into the wrong hands.

Those "wrongs hands" come in the form of different bounty hunters like the Noxus, Spire and Kanden. Each have their own abilities and weapons and you will find them peppered throughout the single player experience.

In the first level, things unfold just like a Prime game. Samus travels to a planet, gets out of her ship and moves toward the critical point on her map. The environments are lush and finely detailed. The enemies respond well. The control with the stylus is stunningly accurate after getting used to it. The puzzles are fun, but a little easy as you would expect for the first level. Even the first boss battle is original and rewarding. 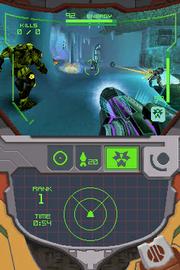 And then it comes: the trademark "we gotta get out of here" timer that suggests something big is going to blow up and take you with it if you don't get out of there. So you race back through the level with some ways blocked off and a bounty hunter appearing to stop you from getting back to your ship. But once you do, nothing blows up, no explanation is given as to what the rush was and that's when you realize the world isn't as progressive as the original Prime. You have to travel from planet to planet to uncover different artifacts. While that isn't necessarily a bad thing, the arbitrary timer race is. And it happens at the end of most levels, never revealing justification for doing so.

As you progress, the puzzles really don't stretch beyond lock and key types, so the focus becomes almost purely on action. While the Primes for Gamecube were arguably First-Person Adventures, Hunters can be faithfully called a First-Person Shooter.

Don't get me wrong, it can be a bit of a bummer to experience the shift, but when you realize the scope of what is being accomplished on the handheld, you'll jump out of your seat even if some room designs and boss battles are recycled. 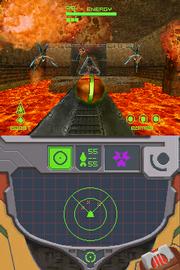 The single player experience alone would land Hunters in the solid 90 range, but the multiplayer modes for which we've been clamoring forever are finally included and are online.

As you bookmark friends and rivals, you can play with three other people in a gaggle of fun modes. Although the names and items are different, half of the modes resemble the typical capture the flag, king of the hill and deathmatch types. The Prime Hunter mode makes the designated hunter lose power, only regaining it by killing others. Whoever kills the hunter becomes the hunter and the goal is to acquire a certain amount of time as the hunter. You can even add bots to the matches if you are down one or two friends.

You can choose between Samus and all the bounty hunters you've killed in single player mode. Each one has its own strengths and weaknesses. The multiplayer maps are designed very well and are finely tuned for the four player limit. If you don't have any friends bookmarked, you'll be bafflingly limited to deathmatch online. But all you need is to get a few and you're set for the wide array of modes available. 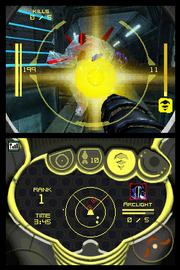 Despite the four player limit, multiplayer is surprisingly robust, fun and lag-free. You can even chat with your buddies in the pregame lobby, which is also surprisingly clearer than many cell phones.

The sound is impeccable, featuring a wide array of clear grunt samples, great weapon effects and faithful replications of the Prime tunes we're used to. The graphics do get a little jaggy and repeated at times, but the overall package is lush and beautiful, very reminiscent of the GC Prime games.

Prime joins Mario Kart DS as one of those no-brainer titles any DS owner must purchase. The single player mode is good enough to warrant the asking price, but the robust online multiplayer seals the deal, finally taking the series to the obvious next level.