It's time to return to the qualities that got you here

Back when the original Playstation was king there was a very limited number of car based games to play -- the car combat of Twisted Metal and the racing of Grand Turismo. That is until Driver came along and presented a story based game about being a wheelman on the way up the crime ladder. Later came Driver 2 which was the first game to allow the player to get out of the car in 3D and steal other cars (too bad there were only about 5 cars to choose from). Much later there was Driv3r, and no one wants to remember that game.

Now Atari and Reflections Interactive have released Driver: Parallel Lines which thankfully takes most of the issues in Driv3r and fixes them while maintaining the heart and soul of the original two games.

Parallel Lines starts out much like the first two games did the main character, TK, is new to a big city, this time 1979 New York, trying to work his way up to the big time. However, in previous games the player made it and in Parallel Lines he does not. Instead about half way through he is framed for a murder and imprisoned for twenty some years. Thankfully, TK spends all that time in jail reminding himself that when he gets out he is going to right the wrong, aka kill everyone involved. 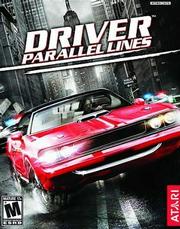 When TK is released from prison in the year 2006 the game really picks up and gets interesting. The first half of the game is fairly ho hum with easy missions and the second half is truly exciting with faster paced chase scenes and many more gun fights. Overall, the story is well presented through high quality cinematics and top notch voice acting and should be able to draw the player in fairly easily. It also helps that the story missions are varied and do not run stale quickly.

When the first Driver was released it challenged the driving control schemes of the time because it did not attempt to provide a simulation feel. In fact, the basic concept was based around twitch controls so that weaving through traffic during any of the high speed chases would be easy and exciting. Thankfully Reflections Interactive has returned to these roots.

Unfortunately the shooting controls, on foot and in car, are not as well done. The game is designed so that with a push of a button it will select the nearest target to lock onto and then with a flick of a thumb stick it is possible to switch targets, however, rarely is this possible. All too often the game does not switch targets at all and so the player is left to fight the system. There is the option to manually aim, but unfortunately it is far too sensitive to be very accurate. Yet, the game rarely requires much accuracy so that feature will probably go unused for the most part. The most disappointing aspect of the controls is that there is no way to manually aim while inside a car.

The presentation is extremely solid. Many games have tried to use licensed soundtracks to create an atmosphere but few succeed as well as Parallel Lines. It takes probably the best music from each time period and melds them together beautifully. Also, the way the city changes from the year 1979 to 2006 is a great touch because it definitely makes the city feel different, even if the map really has not changed.

However, the game isn't flawless. It definitely suffers from being on the current generation of hardware because the textures tend to be muddy and the character models are far from exciting. Also, though the draw distance is respectable, there is a bunch of pop-in which can, at times, be quite hazardous to the player and his vehicle. Furthermore, for the long time fans of the series there is no director or survival mode to fiddle with anymore which removes much of the replay value.

In the wake of such a dismal game as Driv3r it would have been easy for Atari or Reflections Interactive to throw in the towel and drop the Driver series, but thankfully they did not. With this new iteration they have resurrected the old controls and breathed new life into the series. Though the game isn't perfect, it features a solid story, a large number of cars to drive, a trunk load of unlockables and possibly the best licensed sound track ever. If the Driver series continues on this path in the next generation it could start to give Grand Theft Auto a true run for its money.