Our impressions of Nintendo's flagship plumber on the revolutionary console 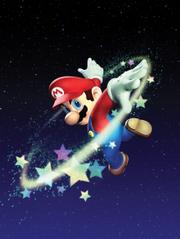 The very first time I laid my hands on the Wii controller, it was to play Super Mario Galaxy. Immediately upon picking up the "wand" and "nunchuck," however, any minor degree of skepticism I might have had was immediately dispelled. It was hard to get used to at first, but only for a few seconds. Once you've become accustomed to moving with the analog stick while collecting items and playing with environmental objects with the Wii-mote, you can explore the huge demo level with ease. The "Star World" in the demo seems to be reminiscent of the areas in Super Mario 64. Like those classic stages, it features several different paths you can take. I encountered three completely different boss battles in this one world just by taking different routes each time. Jumping from planet to planet is a blast, as is playing with the environment with the star cursor. I have absolutely no doubts that Super Mario Galaxy will be ranked amongst the great Mario games of all time.

This is one of the four big games that will make you need, not want, a Nintendo Wii this fall. It's not likely to launch with the system, but Nintendo will make sure that you are aware of it when they do launch the hardware. As with Super Mario 64 before it, Nintendo has once again taken the classic platformer formula and flipped it on its end in creating Mario Galaxy. Finally, a true sequel to Mario's 64 bit adventure (no goofy water spraying devices here) and it is good. The E3 demo had us maneuvering our red capped friend through a level featuring multiple very small planets and flying through space between them, ultimately ending with a boss that erupts from the center of a volcano and hurls lava rocks and... coconuts. Whirling the Wii controller in the air would spin Mario into knocking the coconuts back into the creature and eventually kill him. Well, the Mario franchise has never been known for being logical or realistic. Regardless, the controller was intuitive and very quickly felt extremely natural and smooth. In the same way that I react to meat lovers pizza and a cup of ranch dressing, a smile grew on my face that I couldn't control even if it were shot full of Botox.

This game is looking good, but I wonder about the price. Will Nintendo try to pull the Next gen excuse and sell their games for $60 as well or will they stay at the $50 price tag.

Nintendo is back! Pretenders to the thrown kneel before them.

I agree with Kevin. Clearly price is going to be a big issue in this nex generation with Sony launching at 2-3 times the price of it's competitors. So I can't imagine that Nintendo would sell their games or even let their 3rd parties sell for more than $50. Afterall, the development costs for Wii games are going to be much much lower than that of PS3 games and to a lesser extent, Xbox 360 games.