There is no reason: Not to own a Nintendo DS

Remember the first time you picked up the original Super Mario Bros. for the Nintendo Entertainment System? As we all were, you were blown away. Fast forward a console generation and put yourself back in the seat the first time your jaw dropped to Super Mario World for the Super Nintendo. Same reaction, I'm sure. If you ever wished for the next leap in Mario side-scrolling greatness, your game has arrived.

New Super Mario Bros. builds mostly upon the gameplay of the first "super" iteration for the NES, but the peppering of Super Mario World influences can't be denied. To put it simply, NSMB is the most enchanting and magical Mario-based side-scroller ever conceived.

You can navigate the overworld map much like Super Mario World, moving from level to level, defeating a final castle boss to move onto the next world like in Super Mario Bros. 3. At the onset, traditional baddies such as goombas and koopas litter the stages with familiar blocks and platforms on your way to the goal flag where the higher you jump on it, the higher score you get. 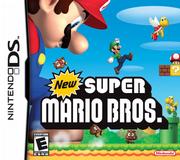 As you advance further, however, new enemies and platforming elements are introduced, freshening up the classic gameplay, but taking it to new heights. Even in the final stages you will see enemies that never appeared in previous worlds.

In addition to normal abilities, Mario can wall jump, butt stomp, triple jump and seek brand new items. The hammer shell allows you to turn into a deadly ground bullet when running at top speed. The big mushroom turns you into a virtual Mario-zilla to bust through blocks, platforms and pipes that are usually static objects. Finally, the micro mushroom shrinks Mario so small that he can reach smaller places and even run on water! Throughout the campaign, every new ability has its place and never feels like a frivolous addition. 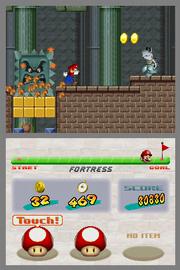 Each stage is classically exhilarating, although seasoned gamers and speed freaks will blaze through the main quest in less than five hours. In fact, by default you will skip two whole worlds that have to be uncovered through secret passages. But NSMB's length is in the hands of the gamer. The main draw that adds hours to its life is collecting the three major coins in each stage. With these coins, you can buy paths to new stages or mushroom houses that contain mini games for varying power-ups.

If one legitimate complaint can be lodged against this obvious classic, it's that many of the bosses are way too easy. While some of them have patterns that can be learned and adhered to, almost all of them can be fire-balled to death in a matter of seconds, making it easy to bypass the design's intent. My advice would be to not use your flower power on bosses to get the full enjoyment potential.

Although the mini games from Super Mario 64 DS make a return, you can now play wirelessly with one pack. But the real new multiplayer addition is the fierce Mario vs. Luigi mode where you battle through circular levels to gain more stars than your opponent, using the environmental items and hazards to impede his progress. This surprisingly fun mode will add even more life to the instant classic.

The touch screen is not used much. You can touch a world to instantly travel back to it or touch an item you have in your spare slot to use it at will. It seems that Nintendo wants to push their franchises on the newer hardware to fully take advantage of their best handheld technology.

Also, the graphics could not have been done on the Game Boy Advance. The characters are modeled in full 3D and set to a 2D platformer. This tactic makes for more dazzling visuals and animations. Each world has its own wild personality and provides the variety you've come to expect from a Mario title. The sound is also crisp and clean with fun voice samples and some inventive twists on old themes.

You will buy New Super Mario Bros. Not only does it pay homage to its roots, but finds a way to pioneer new angles and revives side-scrolling bliss across the video game universe. It doesn't matter if you're a hardcore gamer or a gamer that current generations forgot, New SMB is for you.

Note: Starting May 15, 2006, the "Last Play" grade will be replaced with "Replay" to better disassociate it from "First Play" in game reviews.