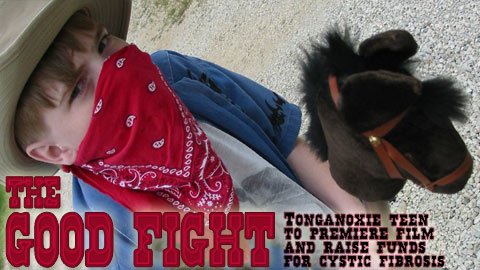 In the soon-to-premiere film "Indiana Bum and the Pamphlet of the Dead," 14-year-old actor Tracy Bowersox portrays a crime-fighting archaeologist who rides a stick horse.

In one action-packed scene, the bumbling protagonist sprints alongside a thief's car as it careens down a dirt road. He wears a bandana to establish his vigilante character - and also to protect against the mold that could irritate his cystic fibrosis.

"Mainly I just have to take a lot of pills," Tracy says of his disease. "It's pretty annoying, but I don't have anything to compare it to."

Twice a day, Tracy straps on an expensive vest and breathes an antibiotic mist for an hour. To eat a meal, he must first ingest a slew of enzyme pills. His coughing fits are so commonplace that Tristan barely even notices them anymore.

Otherwise, Tracy is an ordinary kid - if you consider hyper-productivity to be ordinary.

"I've been told I'll be a filmmaker, an artist, a video-game designer, a writer and a law enforcement officer," Tracy says.

Tracy Bowersox used a Casio keyboard to compose the music for "Indiana Bum," the debut film by the 14-year-old filmmaker and actor. Tracy, who suffers from cystic fibrosis, received a laptop and editing software from the Children's Wish Foundation.

"What I really want to do is make a store and sell books that I've written and movies and games and art and candy - anything that I can make."

Fifty years ago, Tracy wouldn't have been expected to live past nursery school. These days, with the help of treatments developed in the early '90s, CF patients live to a median age of 37.

For video-game aficionados like Tracy, the ongoing battle against CF is most easily described in terms of the dungeon-exploring computer game "Rogue."

"You have to get cornered by a lot of things," Kevin explains. "If you're careful, you'll live a long time. But it takes diligence and discipline, especially in your teen years."

CF is estimated to affect 30,000 people in the United States. A defective gene causes the body to produce abnormally thick mucus, which clogs the lungs and airways and leads to life-threatening infections. The mucus also obstructs the pancreas, preventing digestive enzymes from reaching the intestines to help break down food.

The medical community remains cautiously optimistic about finding a cure for CF - as it has since Tracy was diagnosed with the disease in 1992.


Video from "Indiana Bum and the Pamphlet of the Dead," by the Bowersox family

"They told us that this was a very good time to have CF because they had just discovered the CF gene and they felt like a cure was right around the corner," Jodi recalls. "Well, here we are 14 years later and we're still waiting."

Though small, the CF community is vigilant in its efforts to cure and control the disease. The hub of this community is the Cystic Fibrosis Foundation, which promotes the development of new treatments and supports 117 care centers across the country.

CFF will be the beneficiary of the proceeds from the May 31 Liberty Hall screening of Tracy's film, "Indiana Bum."

"I think CFF is one of the very best foundations for raising money and using it well," Jodi says. "We could just give them $100 that we spent on Liberty Hall and they would have a hundred bucks. But if we get 200 people to come, we can give them $1,000."

The 30-minute comedy utilized the combined talents of the Bowersox family, improving upon previous "Indiana Bum" shorts that Tracy created with his cousin Jordan Rebman.

"They were funny, but they weren't very good," says Tracy, who names Tim Burton and anime guru Hayao Miyazaki as his two favorite directors. "Most of them are just lame parodies where we took the name and put 'bum' in it, like 'Bum Wars' or 'James Bum.' We were into the word 'bum' at the time."

"Indiana Bum and the Pamphlet of the Dead"

Seeing the potential, Kevin - a former KU film student - wrote a script that took advantage of Tracy's penchant for comedy. The story follows Indiana Bum as he helps a police detective (portrayed by Tristan) find a thief that stole an artifact from the Kansas City Institute of Old Stuff.

"Their characters sort of are them," Kevin says. "Not that Tracy is dumb, but a defining element in Indiana Bum is his brashness - and that's Tracy all the way."

The film looks and sounds slick thanks to a gift from the Children's Wish Foundation: a laptop and professional-grade editing software. These tools allowed Tracy to compose an original musical score for the film and record voiceovers during post-production.

"I'd start doing it and then Tracy would come along and push me out of the way," Kevin recalls. "He was just like, 'No, no, no - you're doing it all wrong.'"

The gifts also allowed the "Indiana Bum" production team to avoid the No. 1 pitfall of amateur films: not being able to understand the dialogue. 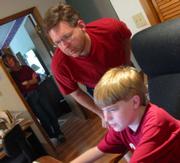 Tracy Bowersox views the trailer for "Indiana Bum" with his father Kevin and mother Jodi.

"Most of this stuff is sitting in people's houses and they could be making movies and telling stories," Kevin says. "I think it's great that we've reached that point - I remember struggling along with Super 8. It was a hassle just to get sound and film together."

Rebman, 13, helped shoot the film and portrayed the "Old Man" character. He says he was impressed with the final product - especially the slick computer effects and funny sight gags.

"If I would have made a movie like this I don't know if I would have been brave enough to screen it at Liberty Hall," Rebman says.

"Tracy doesn't care. He doesn't want it to fail and so he's going to make sure it doesn't."

The Bowersox family will raise money for future productions by selling "Indiana Bum" DVDs and T-shirts. Though they spent about $600 to make the film, they will donate all of the door proceeds to the CF foundation.

CFF Communications Director Carolyn Habbersett says that living conditions for CF patients have improved dramatically over the last few decades, but there is much work to be done.

"There are two very specific drugs to help CF patients that we didn't have prior to the '90s (pulmozyme and tobramycin), but it's difficult to calculate the benefit of those drugs on the current population," she says. "Tragically, there are still people who pass away in their twenties."

Habbersett says that CF is not a painful disease to live with so long as it is carefully controlled. The exceptions are when violent coughing fits occur or insulin treatments are required.

Most often, patients become frustrated by the day-to-day challenge of breathing with decreased lung capacities, she says.

"If you put a straw in one nostril and hold your other nostril shut and try to breathe, that's about their full capacity," Habbersett says. "That's a good day."

Over time, Habbersett says, the airways and lungs of CF patients become worn down from the extra effort that it takes to breathe. Lung transplants are often performed in the final stages of the disease, though the life expectancy beyond that is less than five years.

The severity of the disease depends on the particular gene mutation, of which there are more than 1,000 catalogued varieties. Scientists are just now beginning to correlate particular mutations with their symptoms and ideal treatments, Habbersett says.

If a cure is to be found, it will have to correct the CF gene itself and not just the defective cells, she says.

"The immune system is just too wise and would reject the treatment the second or third time," she explains. "It might be a combination of gene therapy and protein therapy that will really be the ultimate cure. It won't just be one silver bullet. The disease is way too complicated for that."

Though frustrating, the race for a cure is still a source of hope for the Bowersox family.

"If they figure out a way to cure CF, all these other genetic diseases will fall right behind it," Kevin says. "It's a touchy area. You're talking about retroviruses and stem cells and all kinds of these things that are very controversial." 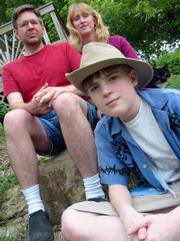 Both Tracy and Tristan were home-schooled for the majority of their elementary-school years. Jodi attributes much of Tracy's creative spirit to the open-ended possibilities of learning at home.

"Rather than doing some elective that you don't care about at all, you can do what you want to do," she says. "If you're an average kid doing average stuff, you'll fit in great with the public school system. If you work at a different pace than they want to deal with - forget it."

Jodi spends much time online researching other people's solutions to living with CF. She recently tried giving Tracy whey protein drinks but that only brought about an itchy rash.

"A lot of times it's just trial and error," she says.

To his friends and family, Tracy is a fairly normal teenager with boundless creativity and strong convictions.

"He doesn't get along with people he doesn't like, which is a lot of people actually," Tristan says. "But if you're not a person who annoys him, then he's a funny kid and he's pretty easy to get along with."

For Tristan, who aspires to attend film school at KU, "Indian Bum" offered an opportunity to hone his directing skills.

"The people who I've only told the title to seem a little dubious," he says. "I think once people get into it they'll forget that it's a 14-year-old riding a stick horse."