In the last week, I've been playing an influx of movie-based games. I've reviewed two X-Men games, the Da Vinci Code game, and one based on the animated Over the Hedge movie. Both of the former games I mentioned had every right to be entertaining games. They were based on licenses that should have translated well to a videogame experience. But you know what? Over the Hedge ended up being the most fun of all of them.

Granted, it's not a great game by any means. It's just easy to control, filled with personality and most importantly of all, great for kids. Controlling the different woodland animals is easy enough for young children to pick up and play, and even easy enough for gaming-ignorant parents as well. Co-op mode may not feature a whole lot of activities that require teamwork, but it would still make for a good parent-child gaming experience. 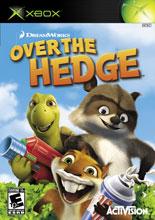 Missions are generally short and feature simple objectives. It's usually a matter of getting from point A to point B while hitting a bunch of enemies with a golf club along the way. You'll encounter motion sensor traps, flying barbeque grills, bears, rabbits and a ton of other enemies. Fights aren't exactly intricate chess matches, they're just a matter of hitting X until they're dead. Along with the melee weapons (clubs, hockey sticks, etc) you'll also be able to shoot projectiles and do special area-damage attacks. If you're sitting on your partner's shoulders, you can also perform a useful spin attack by simultaneously pressing Y.

Some stages will mix up the formula a bit by adding different gameplay elements. A couple areas will feature the protagonists being pursued by something (a bear, bulldog, etc) and all you really have to do is move left and right and jump over obstacles. It's actually a lot like those old Crash Bandicoot levels where you're avoiding the boulder. Another stage requires you to protect a wagon full of stolen food. When you approach security-laden portions of levels, a little minigame pops up that plays like whack-a-mole. These aren't particularly thrilling areas, but it does serve to break up the formula at the very least. On top of that, there are three unlockable minigames that serve as a decent distraction from the main story.

Visually, the game looks pretty much exactly how you'd expect it to. I've only seen the trailers for the movie, but the game appears to capture the look very well (both in terms of environment and character design). There are some areas in which collision detection is a foreign concept. When you play co-op, you can literally walk straight through your partner without any problem. The soundtrack is full of basic upbeat tunes, but the voice-acting is pretty terrible. It wouldn't be so bad on its own, but it's painfully obvious that the voice actors are trying to emulate the Hollywood stars from the movie and failing.

Over the Hedge doesn't really offer anything new or particularly entertaining for the experienced and/or older gamer. However, it's far better than I'd expect considering it's aimed at kids and based on a film. If you're a huge fan of the movie or a young gamer who wants a good two-player experience, picking up this title wouldn't be a bad decision by any means.