Hands-on with the Wii

Last Sunday, Andrew Campbell and myself had the opportunity to head to the Nintendo Fusion Tour to take one last pre-release look at the Wii before the big day comes. Here's what we thought:

While it was just an appetizer compared to E3's full buffet, the Fusion Tour was a nice chance to check out a few titles before launch day. I had hoped to try out the new sword control for Twilight Princess, but it was sadly not at the event. Apparently, the line for it would be too big and violate the Uptown Theater's fire code.

Because of this, there was only five kiosks set up. The games available were Excite Truck, Wii Tennis, Wii Bowling, Warioware, and the Duck Hunt-esque shooting demo.

Excite Truck was the only game that I hadn't played at E3, and it was perhaps the hardest to control. Rather than "steering" the controller like I had expected, you have to tilt it to the left or right to turn the truck. It played decently, but I'm sure future racing titles for the system will refine the controls a bit more. 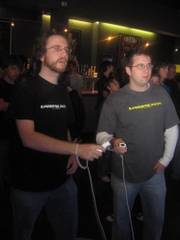 Wii Tennis was almost identical to the E3 version, but I had a chance to try out multiplayer this time around. It was a blast playing with just two players, and I'd imagine it would be fantastic with four. The ball responded realistically to the motions of the Wii controller, and the rumble feedback was great.

Bowling took a little more getting used to. I was a bit timid with the controls at first, until a Nintendo employee advised me to "roll" the remote faster. By doing this and releasing the B trigger at the time you'd actually release a bowling ball, it did a great job of simulating a real-life game.

Warioware was just as hectic, insane, and entertaining as it was back in May. I've always been a huge fan of the series' manic and unique "microgames," and the Wii controller adds an entirely new dimension of hilarity. I got to see a few new minigames, including one that requires you to put it on your hips and jump rope.

All in all, it was a bit disappointing that the "big guns" weren't on display, but I'm still absolutely convinced that the Wii will be an important step in the evolution of gaming. Get your tents ready and head to your local electronics retailer on the 18th:you won't regret it.

With just under two weeks to go until the Wii launches, I'd be lying if I said my anticipation wasn't extremely high. After finally getting my hands on an actual Wiimote and spending some quality time trying out the system, I think the next two weeks just got that much harder. Needless to say, I was extremely happy with how well the system controlled in all of the demos I played. Here are my impressions for each of the individual games:

Warioware Probably my favorite game there. The minigames are every bit as quirky as the other games in the series, and the use of the Wiimote is spectacular. I initially had some problems with pointing at the screen, but I have a feeling this was simply a problem with the demo station itself and not the system. After that was resolved, I got to try out a handful of the minigames that will appear in the final version. Prior to each minigame, a small picture tells you how to hold the controller, and the wide variety of stances really accentuated how many uses the Wiimote will actually have. The games themselves ranged from driving cars to jumping rope to hula-hooping. Each of these required a different position for the controller and a different movement on my part. All in all, a great indication of things to come.

Wii Sports: Tennis This was probably the easiest game to learn that we tried. Control was comprised of simply swinging the Wiimote in the motion of a tennis swing, and the characters responded correspondingly. Since Wii Sports will be many Wii gamers' first introduction to this system, this feels like a great way to usher them in. I could seriously teach my mom this game.

Wii Sports: Bowling Another very intuitive game, easy for beginners. Players can use the directional pad to line up their roll, and then by using the trigger button and by making a bowling motion, their character will throw the ball accordingly. By putting curve in the motion of your swing, it will also make the ball curve in-game. Once again, pretty basic, but a great demonstration of the Wii's capabilities.

Overall, I was really impressed with the time I spent with the Wii. The controls are even more intuitive than I expected, which I think will help bring in a whole new audience of non-gamers. I do wish we had gotten a chance for some hands-on time with Zelda and Metroid, but unfortunately, those weren't at the show. Regardless, from what I've seen, my excitement for the Wii has only grown.

I thought Excite Truck is by far one of the best titles. The Wii will be amazing, for sure.

But I'm confused that you don't think it mimics steering motions. You turn the Wiimote exactly like a car's steering wheel. Were you thinking it would function like big rig steering if the steering wheel was perpendicular to your torso?

Excite truck is pretty sensitive, sure, but it took maybe a race or two only to get used to.

If anyone hasn't had the chance yet, go to EB and try it out! I have witnessed many skeptics converted to believers.