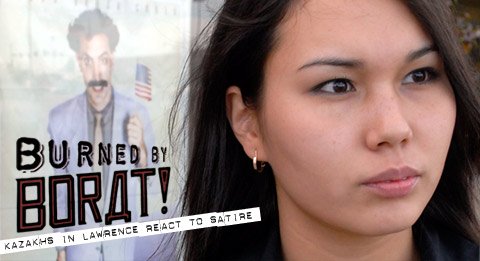 Zhanar Bekturganova, a Kansas University student from Kazakhstan, is upset by the depiction of her country in the comedy "Borat." The film opened in Lawrence last Friday.

Not since the fall of communism has the former Soviet Union seemed so immersed in the media spotlight.

TV news and entertainment programs, movie theaters and Web sites have been infatuated during the last week with one denizen of that region in particular: Borat Sagdiyev.

His movie, "Borat: Cultural Learnings of America for Make Benefit Glorious Nation of Kazakhstan," follows the raunchy Kazakh reporter as he hatches observations while traveling from New York to California.

Only Borat is really comedian Sacha Baron Cohen. And he's from England, not Kazakhstan.

The trouble is that for many Americans, their whole impression of Kazakhstan comes from Borat's less-than-flattering portrayal.

"The whole thing he is saying is not true. It's not very pleasant to see how someone is telling not very good things about your country."

Bekturganova is not without a sense of humor about Borat. She admits to finding some of his gags funny. But it is more the effect he's had on Americans that she resents.

"Many people are trying to (quote) things from the movie to me. They think he's a very funny, interesting person. But some of them still think our country is something like he is showing. They ask me, 'Is it true in Kazakhstan people have sex with their sisters?'" 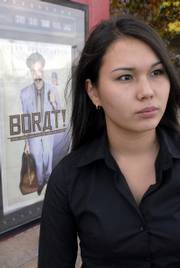 Zhanar Bekturganova, a Kansas University student from Kazakhstan, is upset by the depiction of her country in the comedy "Borat." The film opened in Lawrence last Friday.

Erik Herron was familiar with Cohen's work on TV's "Da Ali G Show" and has seen clips from "Borat" on YouTube. As director of KU's Center for Russian, East European and Eurasian Studies, he was initially amused by Borat's schtick.

"In some respect it's more of a social and political satire of the United States than it is of Kazakhstan," Herron says. "The danger is that American public opinion is sometimes swayed by information that is not entirely accurate. It worries me there will be a perception of it as a country of misogynistic, anti-Semitic, anti-gypsy, racist, horse urine drinkers."

There is a surprisingly large contingent of Kazakh students in the Lawrence area. Nine currently attend KU, and another handful are scattered throughout Kansas City.

"I know only five of them," says the 19-year-old Bekturganova, who is studying architecture at KU. "We are here to study, so we don't go out a lot. We live in different dormitories, so it's hard to be friends. But we know each other. Sometimes we go to movies like this."

A native of the city of Karaganda, which is populated by nearly a half-million people, Bekturganova says the depiction of her homeland in "Borat" is a complete fabrication.

"It's pretty big," she says of Kazakhstan, which is the world's ninth-largest country. "There are a lot of rich people in our country. We have a lot of cars. We live in the usual buildings. It's a modern country. There are no cars pulled by donkeys."

Geographically, the nation is bordered by Russian, Uzbekistan, Kyrgyzstan, Turkmenistan and China, and it shares a coastline on the Caspian Sea.

She adds, "We have a stable economy. We're a very young country. Democratic. If it was a country like Borat is showing, I wouldn't be here. But I'm here. I have a scholarship from my government. Our education system is not perfect. But they're trying to be sure in their future, so they've sent young people to study abroad."

Coincidentally, the same day "Borat" was released into theaters last weekend, a visiting contingent from Kazakhstan arrived in Lawrence.

"I'm angry," says Asset Botaibekov. "Simply, his jokes are not correct for Kazakhstan. It's not true. Now he's a person non grata in Kazakhstan."

(In a news conference, Kazakh Foreign Ministry spokesman Yerzhan Ashykbayev called Cohen's character "utterly unacceptable, being a concoction of bad taste and ill manners which is completely incompatible with the ethics and civilized behavior of Kazakhstan's people.")

The group of students said they were accustomed to watching American movies, citing recent examples such as "Mr. and Mrs. Smith" and the latest "Mission: Impossible" sequel. But they were split on whether they would use their downtime this week to catch a showing of "Borat."

Sacha Baron Cohen is Borat, an enthusiastic journalist from Kazakhstan who travels across America to make a documentary. The film continuously blurs the line between its fictional narrative-which features actors-and documentary-style sneak attacks on oblivious real people. A biting satire on prejudice and bigotry, it is the most fearless and funny comedy in years.

Professor Herron says that most of the Kazakhstan-oriented information dispensed by Borat has no basis in fact.

The depiction of the region as sub-provincial huts where cows share rooms with citizens is, of course, ridiculous. (Scenes from this part of the movie were actually shot in Romania.)

Herron describes Kazakhstan as a country that is starting to devote a large percentage of its oil wealth to education.

He also says Borat's outrageously anti-Semitic behavior (comedian Cohen himself is Jewish) is a gross exaggeration.

However, Herron does understand why Cohen would choose the country as the starting point for his faux character.

Thus, it is all the easier for Cohen to dupe unsuspecting westerners into actually falling for his obnoxious behavior.

Whether Kazakhstan itself will suffer much from Borat's representation is still a matter of debate.

"People aren't going to stark flocking to Kazakhstan for tourism. It's a pretty exotic and hard-to-reach destination. But you don't want to turn off the few tourists you get by these perceptions of it being a relatively uninviting place - even if people know deep down it's satire," Herron says.

"One of the things I've puzzled with is you could probably have an even more vicious satire of Americans and the knowledge they have by making up a country with a 'stan' at the end."

What wrong with Larry the Cable Guy?

I agree with avaholic, that if you look at the title of the movie very closely it clearly is intended to bring to light what it means to live in America.

The references to Kazakhstan are just a comedic counterpoint and a neccessary contrast to show America's retardness.

Cheer up Charlie, you're not the only one who is pissed; The southerns, feminists, frat boys, hotel managers....none of them have happy faces right now....but millions of others do when we watch this movie...so thanks Kazakhstan for taking one for the team!

not to mention the fact that a probable half of America couldn't place the country on a map, let alone know Kazakhstan exists.

one hell of a load of free publicity.

i would be pissed too, don't get me wrong, but not enough to feel affected by any means. it's comedy. it's kazakhstan's turn to be a joke. anyone living in kansas would know how that goes. we've been a friggin' joke to our own nation for how long now?

remember when they came out with that movie....what was it....something like....'the wizard of oz'? Kansas is nothing like that but you dont see people suing MGM about it. Maybe they should. Im tired of Toto.

Then I get to be pissed off at Larry the Cable Guy for misrepresenting working-class Americans, dammit. Methinks it was a slow newsweek at Lawrence.com.

This movie is a satire, if satire means "to steal money from idiots".

It is a farce, if a farce's "ce" is replaced with the cross of HEYZEUS.

It is stupid, and I know because I paid to see it...and the forest is gump.