Bad: Boxing is a bit lacking, some may complain about the visuals

Nintendo wants to open up a new world of possibilities with the Wii, and Wii Sports will be the introduction to that world for most gamers. Packed in with the system, it features simplified versions of Tennis, Boxing, Bowling, Baseball, and Golf. Each is tailor-made to show off the capabilities of the Wiimote, and they do it very well.

Considering that the Wii is hoping to appeal to nongamers, Wii Sports is really the perfect choice for a pack-in game. If an old man or teenage girl with no previous gaming experience played Twilight Princess first, they'd be understandably overwhelmed. Show them how to swing a tennis racket with the controller, however, and they've already taken their first step towards becoming a gamer. 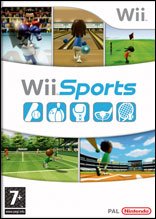 Boxing is the only sport to utilize the nunchuk attachment, and is probably the least responsive of them all. Watching your characters lean back and dodge punches in the same manner that you're moving is hilarious, however. It's possible to throw hooks and body blows, but these are fairly difficult to do. Punching to the face is easy enough, as you just thrust either part of the controller forward. The experience is a bit hectic, and it doesn't feel terribly responsive.

Bowling can be played with four people sharing one Wiimote. It essentially requires you to stand up to play, as you have to do the full back and forward rolling motion. You can adjust your aim and lane position using the d-pad prior to the roll. When you're all set, you have to hold the B trigger for the back motion, and then release it at the same moment you'd release a real bowling ball. It's great fun with four players, and is actually a convincing recreation of a bowling alley experience (add beer for an even better representation).

Jeff Croft (left) plays David Ryan in the lawrence.com dungeon in a spot of Tennis a la Wii Sports. It might be noted that Croft was victorious over Ryan.

Tennis is arguably the most entertaining of the bunch, and it's the only one that four players can play simultaneously. It's always doubles play, and the characters move on their own accord. All that is required of the gamer is swinging the Wiimote when the ball approaches you. It may sound overly simple, but it's actually a tremendous amount of fun. 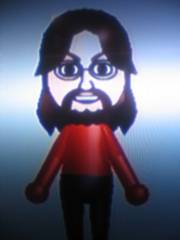 Baseball is less of a full game and more of a pitching and hitting simulator. All outfielders are computer-controlled, and the game will automatically estimate how good your hit was (hit a short grounder and get a single, while a line drive between outfielders might nab you a double or triple). Pitching isn't quite as involving as batting, as you simply hold a button to decide which pitch to throw, and then aim with the d-pad. After you've decided, it's just a matter of making the pitching motion with the controller. Batting is decidedly more fun, and your actions are well-represented onscreen (don't expect any bunts, however). Even if they're not currently playing, you'll see Mii characters from your system in the outfield and batting order.

Golf is another game that can be played with several people on one controller. There's nothing overly complex or unique about the courses, but the control method makes up for it. You can aim on a mini-map using the d-pad, and then take some practice swings to gauge power. Once you're prepared, you hold in the A button to step up to the ball and take your swing. I occasionally had a problem with short putts, as the controller didn't seem to pick up on tiny motions as accurately as big swings.

Simplicity is the key word with Wii Sports, and the visuals make this point very apparent. Characters are cartoony figures that resemble bobbleheads, and the outfielders in baseball don't even have legs. You'll find no advanced textures, hi-def visuals, or crazy particle effects here. But you know what? None of the numerous people that played it with me cared in the least. We were too busy having a blast to complain about visuals.

If I could recommend one thing to anyone planning on playing this game, it's that creating Mii characters makes it far more hilarious. Everyone that came to my house to play it made their own digital recreations, and the different character options make for some hilarious outcomes.

Don't go into Wii Sports expecting complex sports gameplay. This isn't a yearly rehash of an EA Sports game, it's an introduction to a new way of playing videogames. Skeptics that were previously unsure of the Wiimote should head straight to this title for a hands-on demonstration of what it can do. For what it is, it's a fantastic pack-in for an extremely promising console.