When it comes to PS2 racing games, everyone immediately turns to the Gran Turismos and Ridge Racers of the world. However, in focusing on these games, it's easy to forget just how fun flying through the air off giant ramps can be. That's where the ATV Offroad series comes in. The fourth iteration of this often overlooked series offers the same great high-flying racing action that the series is known for along with a wide variety of modes that should keep players occupied for months.

The ATV name is actually somewhat deceptive, as the game also gives players access to buggies, trucks, and MX bikes. Each of these controls very differently, and playing through the wide variety of modes with all the different types of vehicles is actually a pretty lengthy task. The modes themselves are comprised of mostly race-type competitions, except for the Freestyle mode, which requires players to perform tricks and complete objectives in order to earn points. This actually turns out to be the game's weakest point, mostly due to the unfair balance between getting trick points with light vehicles and heavy vehicles. Light vehicles require complex maneuvers in mid air in order to earn points, whereas heavy vehicles can simply gather points by sliding around on ground. It doesn't feel very fair, and as a result, you will probably want to shy away from Freestyle mode's point-based challenges. 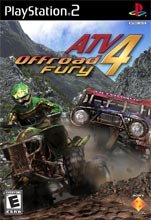 Perhaps the game's strongest mode is its new point-to-point races. During these races, you will compete against dozens of opponents at once to reach the same end goal, and the paths you choose will play a large part in your final rank. The tracks here are absolutely huge, with a large number of path options and a variety of scenery along the way.

However, the real core of the single-player component is the story mode, which unfortunately has a pretty poor narrative piecing it together. The basic plot is that your character is a fallen-from-grace racer who has to work his (or her, you can choose your gender) way back up to the top of the racing ladder. Everything from the characters to the dialogue to the plot itself feels extremely cliched. Needless to say, you won't be missing much in skipping the cutscenes. In between these bits of exposition, the story mode actually features most of the same events found in the Single Events option. At each point in the story, you'll have to compete in a certain number of events before you can advance the plot. Fortunately, you can pick and choose which events you would like to complete, so you can always skip the ones you don't care for.

As you complete events, you will earn money that you can use to purchase new vehicles, new rider equipment, and vehicle upgrades. The upgrade system is surprisingly deep with everything from new engine parts to new wheels to new paint jobs available for purchase. The level of customization is pretty admirable, and the breadth of unlockable content will easily keep you playing for a long time.

Further extending the game's replay value is its wealth of multiplayer options. Standard split-screen is offered on one PS2 system, and players can also take their racers online and compete against up to 5 other players. With the huge variety of modes at your disposal, the game has great potential for lasting value.

Despite the impending next-generation threat, Offroad Fury 4 still looks good in the graphics department. The courses and vehicles both look good, and the framerate is consistently smooth. The only blemishes in the graphical package lie in the story mode's cutscenes and a few somewhat sparse environments. The characters in story mode are especially bland and look like they would have fit into CG cutscenes from 10 years ago. Of course, the racing is the important thing, and in that regard the game looks fine.

Sound is also good for the most part, with sound effects that do an adequate job of capturing the action. The licensed songs on the soundtrack are mostly good, but a few oddball emo and metal songs sound out of place. Once again, the biggest problem in the audio department lies in the story mode's cutscenes, which feature some abysmal voice acting.

All in all, ATV Offroad Fury 4 is an exceptional racing game with a wealth of gameplay options. It's about time this series gets the recognition it deserves, and anyone who likes their racing mixed with a little bit of air time should seriously consider picking this game up.