Challenge: One boss takes so long to beat that you can actually leave the arena, save, and come back to work on him later. We're talking multiple hour fight.

Here we are at the end of an era in gaming, and with it, another Final Fantasy swansong for the generation. As the first true entry in the series in years, Final Fantasy XII sits in the same position as FFIX six years ago, in that it serves as a final send-off for this generation of the series as well as an indication of things to come. FFXII actually does represent a huge leap forward for the series--arguably the biggest change since the series made the jump to 3-D almost ten years ago. More than that though, it's a celebration of everything that has made the series great for so long, and simply one of the best RPGs in years.

The story of FFXII takes place in the world of Ivalice, straight out of the Final Fantasy Tactics series. While it does share those games' races and a few common areas, this version of Ivalice is by and large completely different. In this time period, airships rule the sky and war rages between the nations of Archadia and Rozzaria. Caught in the middle is the kingdom of Dalmasca. The game begins with the assassination of Dalmasca's king under the pretense of a peace treaty with Archadia. Following the cataclysmic events of the game's opening, the action fast-forwards two years to the Dalmascan capital of Rabanastre, which has now fallen under Archadian rule after the apparent suicide of the king's daughter, Ashe.

Here, players take control of Vaan, a young street urchin with big hopes of one day becoming a sky pirate. As the plot progresses, several other characters will join his party including Panelo, a young girl that has been friends with Vaan since childhood, Ashe, the aforementioned heiress to the throne of Dalmasca, Basch, a fallen knight accused of the king's assassination, Balthier, a well-spoken sky pirate, and his companion Fran, a bunny-eared woman with a knack for magic. Together, they set out on an epic adventure to free Dalmasca from the clutches of the Archadian Empire. It's as motley a crew as any other Final Fantasy, and a number of guest characters join the party from time to time, adding even more variety to the mix.

Unfortunately, despite the plot's wealth of political meanderings, or perhaps because of them, the story in FFXII just never seems to click the same way as other entries in the series. There seems to be a sacrifice of the emotional for the political, and because of this, you never quite identify with the characters in the same way as you did with Cloud's or Tidus's parties. I'm not saying FFXII has a bad story by any means--far from it. This is one of the strongest narratives of the year. Still, I couldn't help but wish for some sort of gut-wrenching plot twist, and that just never seemed to come. 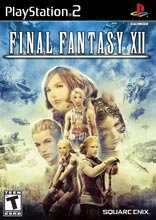 Fortunately, whatever FFXII lacks in plot, it more than makes up for in gameplay. The game is simply a blast to play. Even after beating the final boss after 85 hours of play, I couldn't help but wish for more. This is one of the first RPGs I can remember that never feels tedious, even up to the last minute of play. Everything about exploring, fighting, and character development just seems to work so well.

For one, there's the new battle system, which has been completely overhauled since FFX. Taking a queue from FFXI, the series' foray into online gaming, all of the action in FFXII takes place on the same map. That's right, no more random encounters or loads to battle screens. Now, when you're running around area maps, you actually see the monsters roaming around and can choose to engage them right there or to run past them. Fighting takes place in real time, and you're able to bring up a menu on the fly to issue commands to your party to use spells, techniques, and items. It's a long-needed change to the archaic practice of random encounters, and really goes a long way in keeping gameplay fast and fun.

Aiding the brand new combat style are the gambit and license board systems, both of which are a blast to use. The gambit system essentially gives you the ability to custom program the AIs of your party members. A "gambit" is composed of two parts: a condition and an action. The conditions tell your character when to use the action, for example when an ally is affected with poison, use an antidote or when an enemy is weak against fire, cast Firaga. As you go along, you will unlock additional gambit slots as well as new conditions. By prioritizing these different gambits, you can micromanage exactly how your characters will behave in combat. It's a little complex to learn at first, but once you get the hang of it, it turns out to be one of the deepest and most interesting systems in FF history.

The other big new system in the game is the license board, which works somewhat like the sphere grid in FFX. By defeating enemies, characters will earn license points, which can be spent to unlock new tiles on the board. Some of these tiles allow characters to use new types of equipment and spells, while others simply give them a permanent boost to their statistics such as additional hit points and reduced magic costs. However, simply acquiring the license for a given ability or piece of equipment doesn't necessarily mean you can use it right away. Magic, techniques, and equipment still have to be purchased from a vendor in order to use them.

In choosing how to spend your points, you can custom fit characters to whatever role you choose. Want a heavy-armor wearing, gun-slinging healer? You can do it. Need a speedy thief who can cast black magic on the fly? Done. The license system really does a great job of letting you build your characters however you want, and choosing how to develop your party is one of the game's most entertaining aspects.

Another of the game's best assets is its size. This seriously might be the biggest game to bear the name (excluding the time-suck of FFXI). Players rushing through the story might be able to finish the game in 50-60 hours, whereas completionists could easily spend over 100 hours doing all the side quests. It should be noted that FFXII is noticeably less linear than previous entries. From the get-go, a whole wealth of side quests and areas to explore are wide open to the player. It's easy to put off the main story for hours on end to engage in the game's hunt missions, which reward players for killing challenging named monsters across the world, or to track down the many hidden summons throughout the game.

Unfortunately, those summons, which have been a series mainstay since they were first introduced, actually end up being another one of the game's weaknesses. Famous for their flashy attack sequences and huge damage output, summons seem somewhat worthless in FFXII. In order to summon an Esper, characters are required to use Mist Charges, which are basically the equivalent of one full mana bar. Once summoned, the Esper fights alongside the summoner until one of the two is killed, the summon's timer runs out, or the summon is dismissed. While the flashy attack sequences are still in place, the amount of damage is so minimal and the cost of summoning is so great that you'll find yourself rarely using them. I honestly think I used each summon once just to see what it looked like and then never again. Considering what a huge part they've played in other FFs, this was a little bit of a disappointment.

With the PS2 at the end of its hardware life cycle, it's refreshing to know that FFXII still looks great. Everything players have come to expect out of a FF is on display here in top form, from phenomenal art direction to hardware-pushing technology. The characters look fantastic and the amount of detail shown during cutscenes rivals even some of the early next-gen titles we've been seeing. The environments are absolutely huge and frequently breathtaking to view. Then of course you have the CG cutscenes, which are just as gorgeous as ever. Simply put, FFXII is about as good-looking as the PS2 gets and a great way to send the system off.

The sound is also exceptional. The music works wonderfully, with stirring combat songs juxtaposed by more playful town pieces. While it never quite reaches the same heights as the series' best soundtracks, it's still a solid entry in a series known for great music. The voice-acting is once again top-notch with solid work for all the main characters. Balthier is destined to become a fan favorite with his wry delivery, while Fran is a love-it-or-hate-it nasally monotone. All in all, another solid entry sound-wise, and one that I didn't get tired of listening to even after dozens of hours of playing.

So, is FFXII worthy of bearing the lofty title of a Final Fantasy game? Absolutely. FFXII is simply one of the best RPGs in years, and frankly one of the last great games of this generation. In a year jam-packed with phenomenal game releases, FFXII stands tall as one of the best. If you have ever had even a remote interest in RPGs, you owe it to yourself to give FFXII a try. You won't ask for your 85 hours back.