"Pass! Pass!" Mike Maddox yells, as a gaggle of 5-year-old boys sprints down the hardwood in the Deerfield School gymnasium.

His son, Anderson, leads the pack, dribbling enthusiastically - and sporadically - toward the hoop. He opts not to pass. His lay-up misses the mark, and a boy on the opposing scrimmage team snatches the rebound.

"Get back! Get back!" Maddox redirects. He and Anderson exchange a glance, as if to suggest, "Better luck next time." And the frenzied practice game continues.

In the chaotic world of recreation basketball - populated by eager youngsters with energy to burn - guys like Maddox hold down the fort.

They're coaches. They're parents. Lawrence Parks and Rec depends on them to lead their children's teams.

But they walk a fine line, blurred by perceptions. Will other parents think they're giving their own kids preferential treatment? Will they overcompensate and be too hard on them instead? Do their children even like sports, or are they just trying to please Mom and Dad?

Ninety-five percent of the coaches in Lawrence's recreation league are parents, says Lee Ice, youth sports director for Parks and Rec. The other 5 percent tend to be KU students looking for volunteer hours.

"But I really rely on the parents primarily to volunteer because I know they're going to be reliable," Ice says. "They understand what we try to do with Parks and Rec. ... It's just ensuring that the kids have fun."

That's certainly the goal of Maddox, who played forward for the KU men's basketball team from 1987 to 1991.

"I want to be real positive with my kids," he says. "As long as they're trying, I make sure they know I'm proud of them. It's really not about how many shots they made or what they did; you really want to focus on the positive and the strengths and, over time, keep working on those areas where they can improve."

Maddox coaches both Anderson's team and the team of his 10-year-old daughter, Jamie. He says he does his best to treat all the players equally.

"It's a fine balance," he says. "I probably find myself more being harder on my kids versus the other kids."

But Jamie and Anderson don't seem to notice. Both say they just enjoy the extra time they get to spend with their dad at practice and on game days. And there's an added bonus: 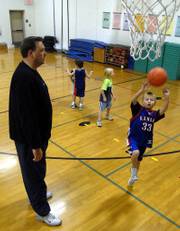 "I get to work on things because he knows what we're supposed to be working on," Jamie says.

One resource parent-coaches can use to ensure balance is assistant coaches, Thompson says.

Glenn Quick depends on that strategy.

"In terms of playing time, I rely on my assistants and say, 'If it's OK with you, you worry about the playing time - make sure it's balanced out - and I'll worry about the fundamentals of the game,'" says Quick, who coaches his 7-year-old son Austin's basketball team.

He says a bigger challenge than interacting with his own child is learning how to work with other team members - figuring out how they'll respond to different coaching styles. But that's also one of the benefits of the job.

"For me, it's fun to see him, but it's also really an opportunity for me to get to know his friends and get to know what they're like," Quick says. "It's been fun to see how he interacts with them and they interact with him."

Neither Maddox nor Quick has had trouble with parents complaining about their coaching or trying to take over from the sidelines. Parents who come to Quick's practices often end up helping him run drills, and Maddox figures he's got some built-in credibility.

"I think I have somewhat of an advantage just because of my past experience," he says, referring to his time with the Jayhawks. "I hope they trust that I do know the game and that we're doing the right things."

Both Maddox and Quick recommend that parents step up to the plate when it comes to coaching their children's teams, even if they don't know much about the sport.

The benefits Maddox and Quick cite - spending time with your kids, getting to know their friends and helping them develop skill sets - have a positive emotional impact on children.

"One of the big issues anymore that's always talked about is spending quality time with your child," says Thompson, who has training in sports psychology. "This is time that's certainly probably not one-on-one, but at least the child gets the message that the parent cares and is taking time out for them."

Kids practicing basketball and interview with two of the players.

To ensure that relationship stays healthy, Thompson recommends keeping the lines of communication open, establishing an environment in which the child feels comfortable saying, ''I think you should have taken me out of the game" or "It hurt me when you yelled at me about that shot."

When the playing field is level, children-players and their parent-coaches can be happy.

"The look on a kid's face when he experiences success - success might be just a nice pass, success might be making a shot during warm-ups - is a victory in itself," Quick says. "That's what's great about being a coach."