Jon Lewis got to see "The Matrix" before it became the new standard for special effects.

He says the movie was "awesome" - even though he was pretty much glued to his sheet music, and the film didn't have any sound as it was projected behind him.

"It's always out of order, so you never see something from beginning to end," the studio musician says. "I'll know the end of the movie before we even play the main title. We don't really need to know what's going on."

Lewis, a 1981 graduate of Kansas University in trumpet performance, has worked his way to being on the A-list of trumpet studio musicians in Los Angeles, a city where it's not easy to work your way up in the music industry. He's appeared on soundtracks of more than 400 movies - not to mention several TV shows, countless jingles and a successful live performance career.

Lewis will be back in Lawrence today to perform for "Band Spectacular!" a second annual fundraiser for scholarships for KU band students. The concert is at 3 p.m. at the Lied Center.

"He's one of the top freelance trumpet players in Los Angeles," says John Lynch, KU's director of bands. "We're so proud of his accomplishments, and he's a really loyal alum. He was so excited when I called him to come back and contribute." 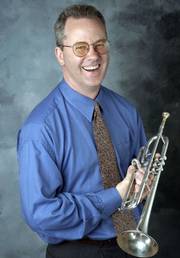 Jon Lewis, a 1981 graduate of Kansas University in trumpet performance, has worked his way to being on the A-list of trumpet studio musicians in Los Angeles. He returns to his alma mater to perform at 3 p.m. today.

Lewis, 47, is a native of Virginia. He was recruited to KU, in part, by James Barnes, who at the time was the director of the jazz program and who remains a KU music professor.

During several spring breaks, Lewis went to L.A. to take lessons from Jimmy Stamp, a prominent California trumpet player, and decided to move there after graduation.

"I did pretty much everything you can do: rehearsal band, Latin bands, community orchestras, brass quintets, weddings, funerals, fanfare jobs where you get dressed up," Lewis recalls. "I actually threw newspapers for four years every morning at, like, 4 o'clock in the morning so I didn't have to get any kind of a day job."

Over time, he started to meet other players and made connections. Eventually, he made his big break - through Dennis McCarthy, who composed most of the music for Star Trek's "Deep Space Nine" and "Next Generation." Soon after, he was hired to play most of the trumpet music for "JAG," the CBS television hit.

Looking back, he recalls those shows as some of his favorite.

"On a weekly basis, you're having solos written for you - particularly for you - and they're being played for millions of people," he says.

But now Lewis has mainly moved on from TV - partly because most TV shows don't have theme music anymore.

Now, most of his time is spent on movie scores. His hundreds of credits include "The Patriot," "Monsters Inc.," "Cars," and, most recently, "The Santa Claus 3."

But he rarely knows the details of the movies until he sees them in person. And with five children - ages 7 to 17 - he doesn't have time to see all of them.

"You don't really need to know anything" about the movies while recording, Lewis says. "We have an opportunity a lot of times to watch what's going on behind us - it's projected behind the orchestra with the video.

"But when you do something like 'Jurassic Park,' they might not have added special effects or the dinosaurs or any of those things. Or even the Pixar stuff - you'll see sketches, but you won't even see the animated stuff or the texture or whatever."

Still, he says, he's trained his kids to know when it's him playing during the score.

"There are a lot of trumpet players out there," Lewis says, "but they have their own personality and sound. My kids are pretty good about being able to pick out who I am in the score, or if I'm just in the section, they can tell the difference if it's me playing first (part)."

Lewis says trumpet players in Los Angeles are more generalists now than they were in the '70s, when there was more work. He might supplement a week of movie soundtrack recording with TV jingles and record dates. His album titles include Puff Daddy, Mariah Carey and Amy Grant.

"Now, the guys are pretty diverse," Lewis says. "They span everything."

But Lewis still specializes in motion picture soundtracks. He likes the variety of recording - and working for such legendary composers as John Williams and Danny Elfman. He might play mariachi music one minute and big-band style the next.

"People think it can be sterile, but it's not," Lewis says. "It has to be exciting every single time you do it. Even when you're exhausted, even when you feel like crap, even when your chops are gone, even when it's the 14th time - you have to make it sound like it's the first time."

At KU this weekend, Lewis will show a variety of those styles, including a fairly traditional piece and a Spanish piece with the Wind Ensemble, and a tune with the Jazz Ensemble I.

"I think it will be a tremendous inspiration," Lynch says, "for students from the Midwest to see someone from Kansas to go out there and make it big."