While its name may not roll off the tongue as easily as the NES classic, Excite Truck does have a few things in common with Excitebike (but not much). Rather, it's a first-party offering that serves as a decent introduction to the Wiimote's ability during racing games.

Holding it sideways, you steer the various trucks by literally steering the controller. 1 and 2 handle brakes and acceleration, while all d-pad buttons activate turbo. I've watched many people try the game for the first time, and every one of them has some trouble getting used to the motion control. It really is very sensitive, and you'll find yourself careening off cliffs and into forests for your first few races.

Once you get a hang of it, however, Excite Truck is a somewhat entertaining title with some interesting gameplay features. Rather than simply focusing on finishing in first, a lot of emphasis is on obtaining star points. You get these by drifting around turns, speeding through trees, catching huge air, or smashing into rival drivers. Because of this, it's possible to finish in 2nd when playing two-player, but still win the race if you have more stars.

Using turbo at the right times is essential if you want to earn a top rating on each course. Hitting it at the peak of each hill will cause you to Turbo Jump, which will send you flying through the air much further than usual. Many of the big jumps have rings that will net you extra stars if you fly through them. While obviously unrealistic, it's possible to steer your truck in mid-air to align yourself better with the track. You can also tilt the controller forwards or backwards to land at the right angle on hills (one of the few connections to Excitebike). 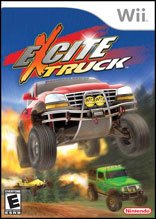 Excite Truck looks its best when you're flying hundreds of feet over hills, but you can still notice textures filling in as you fall. The motion blur creates a nice Burnout-esque sense of speed, and the colors are bright and vivid. All of the sound effects are pretty standard fare for a racing game, and the soundtrack is absolutely terrible. The generic guitar riffs make the music in Dynasty Warriors seem like Led Zeppelin by comparison. Thankfully, the game features the Wii's first support of custom soundtracks through an SD card. It made the experience so much better when I replaced the soundtrack with some Appetite For Destruction and Motorhead.

If it were released on another system, it would be a very generic, standard racer. As a Wii launch title, however, it does a good job of showing gamers what to expect from racing games on the console.