MIA: Smoke's retarded "blow up the world" fatality from MK3

I'm probably a bigger Mortal Kombat fan than anyone you've ever met, a claim that I can back up with the original MKII arcade machine sitting behind me in my apartment. I remember being 8 or 9 years old and looking forward to every Wednesday, as that was the day my grandma would take me to the gas station to let me play the original arcade game. I also remember being a hyper kid running around at recess, telling all of the other kids about "this one dude that rips out the other guy's spine" and the guy who "makes people's heads explode."

While the series has always had its ups and downs (Special Forces, anyone? How about Sub Zero Mythologies?), it has almost always retained an unmistakable sense of humor and goofy charm. Most of this was found in the ridiculously over-the-top and creative fatalities. For whatever reason, Ed Boon and company have changed the series' most famous and beloved trademark.

Rather than each character having specific and scripted fatalities, MKA features a sort of "dial-a-fatality" system. Basically, when you see the words "Finish Him," you can press several different button inputs that take your opponent apart. You can rip off individual limbs, smash their heads, or tear their heart out of their chest, but the creativity has been completely destroyed in the process. Gone are the days where a giant garbage compactor would squash Sektor's foe, or Raiden would electrify his opponent until he exploded. Now, each of the characters has the same system to kill off their enemy, and it's flat-out boring. 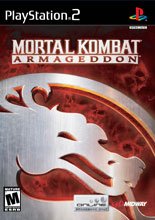 Despite this massive fault, MKA does feature an enormous cast of characters. From the obvious (Sub-Zero, Liu Kang), to the more obscure (Shinnok, Meat), they're all present. Unfortunately, most of the characters from Deadly Alliance or Deception control almost exactly how they did in those titles. Sure, Sub Zero may have a new way to freeze his enemy, but it all feels the same. It is now possible to fight in mid-air, but these situations really don't come up very often.

Deception featured some absolutely hilarious and clever death traps within the stages. Armageddon also features instant-kill traps, but they aren't nearly as creative or inspired. Even the levels themselves seem uninspired and devoid of any life or personality.

It wouldn't be an MK title without a ton of secrets and extras, and this is no different. The Krypt returns, which means you'll have plenty of concept art and videos to unlock. There is also a new Motor Kombat cart racing minigame that is funny at first, but quickly becomes tiresome. Last year's Puzzle and Chess Kombat minigames had far more replay value.

One of my favorite aspects of Deception was the massive Konquest mode. Sure, it wasn't terribly deep, and didn't feature much in the way of action/adventure gameplay, but it was extremely addictive to roam the realms looking for new characters. Armageddon's Konquest mode is markedly different, and resembles MK Shaolin Monks more than anything. It's nice to have actual moves to perform during the mode, but its linear nature makes it far less interesting than last year's.

Visually, Armageddon looks absolutely identical to Deadly Alliance and Deception. Characters still resemble stiff action figures, and blood still flies with abandon. All of the tunes on the soundtrack fit right in with the Mortal Kombat feel, and the characters still make hilarious sounds when getting impaled/torn apart/etc.

As a lifelong Mortal Kombat fan, it's disappointing to see Armageddon turn out to be a "quantity over quality" title. It may feature the biggest roster to date, but there just isn't enough new content (ahem:"kontent") to make it an improvement over Deception.