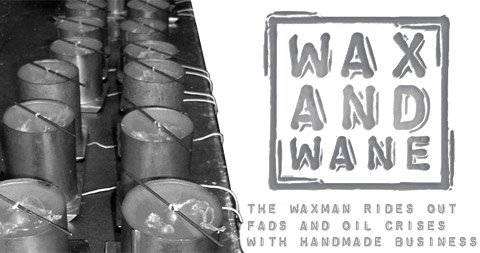 All is peaceful in Bob Werts' workplace. The mood is more monastery than factory-thick drips of warm wax, hushed remarks, and KJHK or NPR soft in the background.

But the back room at Waxman hasn't always been home to such tranquility. In the late 1970s, Werts employed over two dozen people to serve 600 accounts around the world. Werts' product? Handmade candles, in an astounding assortment of shapes, sizes, colors, styles, and fragrances.

In 1979, Werts kissed his wholesale accounts goodbye. Fall-out from the 1973 oil crisis had skyrocketed the price of paraffin wax-which is petroleum-based-and Werts had doubts about the direction and character of his business. He had become a traveling salesman, when what he enjoyed most was making candles.

Now in its 35th year, Waxman is a successful, widely respected Lawrence business. On the first Sunday in December, as he's done since 1974, Werts hosts an open house. The store gets a good cleaning, the staff dresses up, they lay out some goodies, and the mysteries of the ancient craft of candle making are revealed to the public. 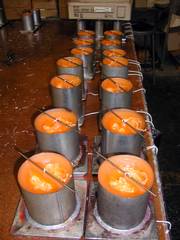 Street Level shadows Werts as he dips holiday candles and waxes warmly on finding his niche, tapering his focus, and becoming a pillar of the community.

lawrence.com: The first thing I noticed walking in here is the smell.

Bob Werts: It's funny because I never made too many scented candles in the '70s-it was all shape, color, wackiness: In the '80s I got involved more with fragrances. :We have 275 fragrances now.

What are the top-selling fragrances?

Brown: Smells kind of like a perfume, a cologne. :Sweetgrass smells like sweet hay. Mayan-it's a perfume as well, a bit muskier than the Sexy.

Do people ever remark that you smell like candles when you go out?

Brown: All the time. People down at Starbucks notice it the most, but I don't smell anything but coffee when I go in there.

[To Werts] How did you get into this?

Werts: In college. I got into it from having time on my hands and no money so I needed a hobby. It was the '60s. I just started doing it.

When did you take it from your home to a full-fledged business?

Werts: I was a physical education major. When I tried to change my major to business, they said; "You have 88 hours, we'll give you 23." I went: "Oh jeez, that's two more years, I don't have the money-I'm just going to open a candle shop and learn business." : That was in '70 when I made that decision. 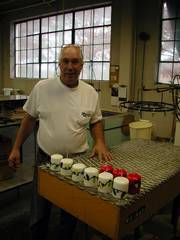 When did you come to this location, 609 Mass?

It's more than just retail, though:

Werts: In the '70s I did a lot of wholesale business because then Lawrence alone couldn't support a candle shop-the town was only 30,000 people. About a year after I opened the candle shop I got an order from a Kansas City cosmetics company for 120,000 candles. I certainly didn't make any money out of it but I did learn how to produce quantity. :Then they gave me another order and I did that in 20 days with ten-grand profit. That money really got me going-I redid a building and built some new equipment.

How many candles a month do you make, all sizes and shapes?

Werts: I would say four or five thousand.

And are they all done by hand?

Werts: All done by hand. There's nothing automated. It's a Roman-style candle operation. :We do everything one-at-a-time. : That's my choice. There are things I could put in here to speed the process up, but that's not our niche.

Are most companies automated nowadays?

Werts: Most companies are. There's not a way to make a lot of money in handmade goods now unless you have the market. Lawrence has supplied me with a good market for my product.

How many employees do you have?

Werts: Nine. :In the early days I was very much on my own-maybe one or two people would help me. In the late '70s when I was doing wholesale, I had about 25 people. We had 600 accounts around the country. In November of 1979, I wrote all 600 of them and said I'm not doing this anymore. :That was because of the oil embargo, and I couldn't get wax : There were probably 1000 candle-makers in the country in the late '70s. And after the oil embargo shook out, by '83, there were probably 90.

Since then have you had to closely watch oil prices?

Werts: Absolutely. My prices have gone up 80 percent in the past year and a half.

Are you a dying breed?

Werts: Well, there's always resurgence, there's always ebb and flow. Candles became very popular in the '90s-a lot of candle places popped up. Oil prices plummeted, wax prices dropped. :From '86 to '98, it was full-steam ahead for us. And that is when this company did its thing. :Now it's an established company and it does fine, but without the '90s we wouldn't be here.

Thanks for hangin' on....I could not show up for the holidays if I did not have a wonderfully aromatic bag with the waxman lable on it. You have helped me maintain "welcome status" at my completely disfunctional family functions.