Bad: Retains it a bit TOO much

I remember sitting in the Kodak Theater at Nintendo's E3 press conference in May when three titles were announced for the DS. The first two were interesting enough (new entries in the Starfox and Diddy Kong Racing series), but it was the third one that really excited me. It was a sequel to the classic Yoshi's Island, which I consider to be perhaps the greatest platformer of all time. After my Wii-fest at the Nintendo booth, this was the first game I headed to when I meandered over to the DS section. Everything seemed great, and it definitely reminded me of the gameplay from the original.

Unfortunately, things get a little too familiar when you really sit down and play through the final version. Stage for stage, it seems more like an expansion pack than a full fledged sequel. Considering the original was released over a decade ago, it would have been nice to see some significant updates to the gameplay.

There are two main differences between the games. One is the obvious dual-screen split, and the other is the ability to switch between several different babies. Mario controls just like he did in the original, Peach can use her umbrella to float higher, DK can throw eggs harder and dash, Bowser can spit fire, and Wario can use his magnet to move objects and collect coins. Most of the time, I ended up sticking with Baby Mario unless the situation called for someone else. Occasionally it'll require you to switch to DK to climb vines or Wario to move something metal, but you can go through most of the game with whomever you choose. 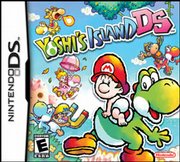 The split screen system tends to mess things up a bit, as it's very difficult to gauge egg-throwing angles thanks to the gap between them. There are times were the split produces some interesting visuals (such as the sections where you're on gigantic stilts that stretch across both), but it's more of an annoyance than anything.

Yoshi's Island DS features literally the exact same art style and graphical quality as the original. This isn't a bad thing by any means, however, as the SNES game was and still is one of the most visually interesting games I've ever seen. Some stages seem like they were drawn in a coloring book, complete with rough edges and vivid colors. Monstrous enemies will morph and stretch across the screen, as well. Many people complained about the incessant baby-crying sound effects in the original, but I never really minded them. They're certainly back (now in five voices!), and I feel it really adds a nice sense of urgency to retrieving it once you take damage.

My complaints about it being too similar to the original certainly shouldn't scare you off of this game it just means more of a great thing. While I would have liked to see some newer gameplay elements than what it provides, it still stands as an fantastic platformer, and is worth any gamer's time.