Harold Leach has pretty much given up hope that his son, Randy, will ever be found alive.

But the Linwood man still has hope that he'll learn what happened to Randy.

That hope, at least for the moment, lies in "Leaves of Words," a play about the mystery written by a Kansas University graduate student that will make its premiere next weekend.

"We thought it would be a terrific idea, and we were more than happy to get any help we could on it," Leach says. "We knew it might generate some curiosity and maybe a phone call or two with some insight into what did take place. I don't know much more now about what happened than I did 18 years ago."

The play, produced by KU's English Alternative Theatre, was written by Tim Macy, a Topeka student majoring in playwriting.

He got the idea from his father, who was interested in the case and collected newspaper clippings on it.

At the time, Leach's disappearance was big news locally. He was last seen April 15, 1988, at a party five miles from his home.

"I thought it would be a good subject," Macy says. "I went out and talked with (Harold Leach) for a little while to feel him out and see if he was receptive. We ended up talking for three hours." 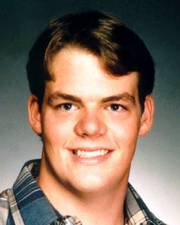 The play, which runs about one hour, 20 minutes, features Lawrence actor Jeremy Auman playing the part of Harold Leach. The father character narrates the play, going through various scenarios that could have happened to his son.

"It's more the hashing-out of the scenarios with the father," Macy says. "I wanted to illustrate this is a frustrated person because he ran into so many brick walls."

Not only have investigators never found Randy Leach, they never found the 1985 Dodge 500 he was driving at the time.

The various scenarios - dealt with both by investigators and in the play - range from suicide or runaway to being murdered by drug dealers or satanists.

Macy sorted through hundreds of police reports and other documents to write the play and tried to include as many possible scenarios as he could.

"Even with that, I didn't manage to get all the scenarios in," he says. "It could have been a four-hour, epic play."

The story - both in real life and onstage - is captivating, actors involved say.

"One thing this play does is it really pulls the thousands of pieces of information together into one dramatic fashion," Auman says.

Garrett Kelly, a freshman from Tonganoxie who plays Randy Leach in the production, says it's not difficult to put himself in a similar situation.

"It's a very intense play and story," Kelly says. "He's sort of my age, too, so it's scary to think about it. I've been to parties."

"It's really tough," he says. "I never knew this person, and this was a real person. People coming to see the play know this kid, and this story affected people. You have to imitate it, but you can't recreate it." 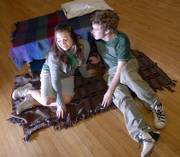 Mackenzie Wiglesworth, left, a KU sophomore from Olathe, portrays a girlfriend of Randy Leach in a rehearsal with Tonganoxie freshman Garrett Kelly, who portrays the missing teen. The play, by the English Alternative Theatre, examines several story lines of what could have happened to Leach, who disappeared in 1988.

Harold Leach and his wife, Alberta, plan to attend all three performances of "Leaves of Words." They say many friends and family also will attend.

"I know it won't be easy, but it's kind of like you don't really have a choice as far as we're concerned," Leach says. "It's something we need to do."

Detectives have opened new investigations into the case occasionally through the years. The most recent came in late 2002, when the Leavenworth County Sheriff's Office and the Kansas Bureau of Investigation briefly formed a task force to look at the case.

But that investigation, like the others, didn't lead anywhere. Leach still isn't sure which - if any - of the scenarios he's thought of seems most plausible.

He still has hope that a show such as "America's Most Wanted" will pick up the story and shed a national spotlight on it.

But for now, he's hoping the play and new media attention surrounding it might convince someone to finally explain what happened.

"A lot of the guys now - this was 18 years ago - may have children almost as old as Randy was," Leach says. "We'd hope they had some sort of conscience, even if they were involved. All it takes is one phone call."