A painting a day

Every weekday morning, John Hulsey and Ann Trusty wake at their home northeast of Lawrence and start painting.

Over the course of a few hours, each paints a 6- by 8-inch artwork, usually a still life or landscape scene.

Then, they photograph the works, post them on the Internet and send an e-mail out to fans and customers with their day's offerings.

"Our customers can be anywhere in the world," Hulsey says. "We don't have to live in an artist community. We could live at the North Pole, if we had a WiFi (Internet) connection."

Earlier this year, Hulsey and Trusty joined a growing number of artists who are not only marketing their works online but also following the model of offering new artwork every day to customers.

Their Web site - www.freshartdaily.net - serves as the home base for "Fresh Art Daily," their variation on a theme that some say could be the future of art on the Internet. All the works they've done since June are displayed.

Douglas County artist John Hulsey works on a small canvas painting of Ted Grinter's sunflower field off of Highway 24/40. Hulsey and his wife, Ann Trusty, are part of a growing trend of artists who display and sell their work on the Internet.

"That's like a whole show you might do for a gallery, and it's available 24/7 all over the world," Hulsey says. "We're so excited about the possibilities of the Internet."

This newest technological trend in art follows the lead of Duane Keiser, a Virginia artist who started a site called "A Painting a Day" in December 2004. The concept was simple - paint every day, and offer the work for sale.

Now, there are dozens or perhaps hundreds of the sites online.

"People are starting to realize the Internet is a viable and effective tool for selling art," Keiser says.

He says he saw interest in his site explode overnight - all because of a brief mention on www.boingboing.net, a site that features interesting Web sites. He offered postcard-sized paintings for around $100 each.

"When boingboing picked it up, they started selling within the first five or 10 minutes," Keiser says. "People would claim it. It became a race."

Now, he's selling his paintings in an auction format, which allows him to earn more on the works.

He's still amazed at the ability of the Internet as a marketing tool.

"I'd paint an egg in the kitchen, and five minutes later I'd get an e-mail from a guy in India talking about the egg," Keiser says. "It's just amazing to me, just a little miracle. It's like opening up a gallery for the world."

Trusty and Hulsey, a married artist team who graduated from Kansas University in the mid-1970s, started a Web site about 10 years ago to feature some of their art.

"If we sell every painting every day," Hulsey says, "we'll cover our expenses." 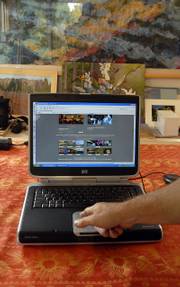 Hulsey displays his Web site that he shares with wife and fellow artist Ann Trusty. The two photograph their paintings and then upload the images to their site, www.freshartdaily.net.

But "Fresh Art Daily" is about more than just making sales, Trusty says.

"It is always a benefit to be painting on a consistent schedule - every day - keeping one's hand and brain aligned within the creative process," she says. "All these tools are taken into the larger work as well."

She says finding inspiration for a painting a day isn't difficult.

"Whether or not that painting is of the caliber that I, as an artist, am hoping for, I'm not always sure," Trusty says. "But I hope that people viewing are enjoying the process and also seeing some of the changes and development of the art."

That's partly why the couple has a blog - www.freshartdaily.blogspot.com- that describes the artwork and their experiences as artists.

Andrew Carothers, owner and project manager with Sprout Design, the Lawrence firm that developed the couple's Web site, says he was unaware of the painting-a-day concept before being approached by Hulsey and Trusty.

"I thought it was a really exciting idea," he says. "I wasn't sure how people would perceive it. But they were courageous to pursue it, and I wanted to help them out."

JOHN Hulsey brushes over the landscape on his oil painting of a nearby sunflower field. Hulsey says the majority of his landscapes and subject matter are found only a few miles away from his home off of Highway 24/40.

Carothers says he thinks the concept helps tell a story about the couple's artwork.

"It's a way for them to kind of keep a daily journal of their lives and share it with the world," Carothers says. "The Internet enables artists to share artwork that might not be recognizes or appreciated in their immediate geographical area. When it's online, it can get recognized around the world."

Trusty and Hulsey continue to show their work at the Strecker-Nelson Gallery in Manhattan and The Gallery at Hawthorne Plaza in Overland Park.

But they've quit showing at galleries around the country like they once did.

"Really, my goal is not to cut (galleries) out of the loop but improve the situation," Hulsey says. "Traditionally, the gallery system was your support, what held you up. You were free to express yourself through your art. Nowadays, we have another support system. We have the Internet as a platform to step up on."

But that doesn't mean galleries will gradually fade away. James Schaefer, who manages Signs of Life Gallery, 722 Mass., says he thinks most arts patrons still want to see a painting in real life before making a purchase.

"You don't get the same feeling online," Schaefer says. "You kind of hope that if we're keeping a whole gallery open, people want to see the artwork."

But he thinks more galleries will start putting their inventories online, providing a new tool for pulling customers into the gallery doors.

And he says some artists will continue to use galleries exclusively so they can focus on their art.

"Artists are not always wanting to be involved with the business side, taxes and all that," Schaefer says. "There's a business aspect to the gallery that some artists don't want to deal with."

Hulsey admits there's been a learning curve in learning the Web skills to upload his and his wife's paintings every day.

But he's convinced the system the couple has set up will improve both their quality of painting - and their ability to market their work - in the long run.

"For an artist, the crux of the matter is it's changed the way we do this completely," he says. "Before, we were taking more time for the studies and thinking which studies might be turned into larger gallery pieces. Now, it happens so quickly - the idea process and the painting process. You think all the time. You have to paint every single day."