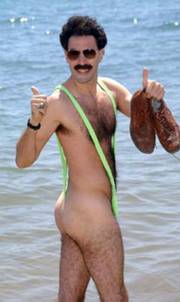 BORATTITUDE PROBLEM - Kazakhstani president Nursultan Nazarbayev met with President Bush last week, hoping to curry favor and increased aid for the former Soviet republic. Although Kazakhstan is an oil rich country friendly to Bush's war on terror, human rights advocates are alarmed by the Nazarbayev administration's poor record on democratic reform, corruption and torture. The meeting was also widely rumored to cover the new film by British comedian Sacha Baron Cohen of HBO's "Da Ali G Show." The film follows fictional Kazakh journalist Borat, who's disingenuous style includes nuggets like "my sister is number four prostitute in all of Kazakhstan," or "I teach you Kazakhstan national anthem - 'Throw The Jew Down The Well'." Nazarbayev is reportedly furious that Borat has become Kazakhstan's most famous "ambassador," evidenced by his government taking out full-page ads in the New York Times trying to counter Borat's impact on global perception. *:Bush offered solace and empathetic company as the leader of a civil-liberties-abusing administration that practices torture. He said having an imbecile as the country's most prominent representative to the world "ain't bad strateegery."

HATED ATHLETE HATES SELF AS WELL - Controversial Dallas Cowboys receiver Terrell Owens was hospitalized for what police ruled a suicide attempt by overdosing on prescription drugs. Owens denied that he attempted suicide, saying that he accidentally took too many pills and became "groggy." *:Owens further clarified that, as per usual, he was merely attempting career suicide.

SLAP BRIT HUME AROUND WHILE YOU'RE AT IT - Bill Clinton caught reporter Chris Wallace off guard when, during an interview for Fox News, the former president responded angrily to Wallace's question about Clinton not doing enough to stop Osama bin Laden. Clinton vigorously defended his record by juxtaposing it against the Bush administration's first nine months in office, saying "at least I tried" and that his administration left a comprehensive anti-terrorism plan for Bush that was ignored. Clinton also called Wallace "smug" and accused him of attempting a "conservative hit job." Clinton's comments put the Bush administration on the defensive, with Condoleeza Rice saying the only plan left was "painfully vague" and did not contain any actionable items regarding domestic terrorism. *:In regards the Presidential Daily Briefing from August 2001 entitled "Bin Laden Determined To Strike In U.S.," Rice claimed that she never saw it because "Clinton ate it." 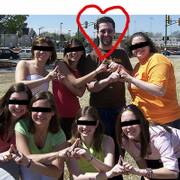 SAVED BY THE BALLS? SHAVED BY THE BELL? SPRAYED BY THE GEL? Dustin Diamond, better known as Screech from '90s teen sitcom "Saved By The Bell," joins the ranks of Tommy Lee and Paris Hilton by having a personal sex tape released to the public. Diamond can be seen in the video with two women, one of whom he introduces to the "Dirty Sanchez." *:Throughout the tape Diamond insists that the women call him Screech, but provides even creepier psychological insight when he insists on calling the two women Zach and Slater.

THE MUSTACHE RIDE IS OVER - United Nations Ambassador John Bolton has effectively lost his job after failing to garner support for renomination in the Senate. Bolton was a recess appointment to the U.N. by President Bush after the Senate initially refused to nominate. Senators of both parties felt that Bolton lacked the temperament for the U.N. following testimony from former subordinates Bolton allegedly subjected them to verbal and physical abuse *:Bolton issued the following statement: "I'm a mother-f*cking diplomat, dammit! You can't do this to me! I negotiate sensitive f*cking detentes amongst peers, douche-bags! Respectfully Yours, Ambassador John F*cking Bolton"

WATER BILL, GAS BILL, SEVERED DEER HEAD, ELECTRIC BILL - Virginia Senator George Allen is once again facing accusations of bigotry after two acquaintances from college claimed that Allen once stuffed a severed deer head into a black family's mail-box. Allen's racial views have been under scrutiny after he called a man of Indian decent "macaca" at a recent public event. Other media reports have said that Allen has displayed a Confederate flag in his living room, hung a noose in his office, repeatedly used the "n" word in private, and had his photograph taken with a Ku Klux Klan-affiliated group called The Council of Concerned Conservatives. *:Allen's press secretary, Mel Gibson, resigned upon hearing the allegations. "I may be blame-the-Jews racist, but I'm not severed-deer-head-in-mail-box racist. I mean...wow." 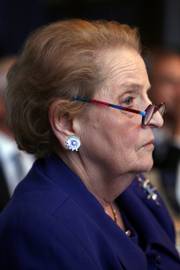 LOOKS EVEN BETTER IN A DRESS THAN KISSINGER - Former Secretary of State Madeline Albright, speaking at the Lied Center in Lawrence last week, predicted that the Iraq war would go down as "the worst disaster in American foreign policy history." She cited the latest National Intelligence Estimate, written by the Bush administration's own intelligence officers, which states that Iraq has become a "cause celebre" for Islamic jihadists and is now producing more terrorists than it is preventing. Albright also denied claims by current Secretary of State Condoleeza Rice that the Clinton administration did not leave a detailed plan to combat terrorism for the incoming Bush administration, reading a passage from the 9/11 Commission report which she said refutes Rice's statements. *:Following her Lied Center appearance, the feisty Albright went on an all night pub-crawl down Mass. Street, during which she drank Bob Dole under the table and annihilated Sam Brownback at arm-wrestling.