Many circumstances relating to the disappearance of Randy Leach in 1988 fueled rumors as to what may have happened to him.

¢ Rumors of satanic cult activity in southern Leavenworth County already were circulating among locals before Randy's disappearance. Word that the party site at the Erwin farm had quickly been cleaned helps fuel such rumors, including speculation that Randy had been ritually slaughtered there by devil worshipers who whisked away the evidence of their mayhem.

¢ The Erwin house burns to the ground "not that long after'' Randy disappeared, said Leavenworth County Sheriff Herb Nye.

¢ In 1988, a man told police he had been abducted by satanists and held captive for two weeks in a cave to the east near Kansas City, but not far from Linwood. The man said his abductors threatened to cut off his left arm and had shown him the corpse of a man hanging in the cave. The corpse perhaps was Randy. It was some time before police searched the cave. No bodies were found. They concluded the man was a drug user who hallucinated the experience. The cave has since been bulldozed at the request of the sheriff, says Randy's dad. The sheriff denies this. 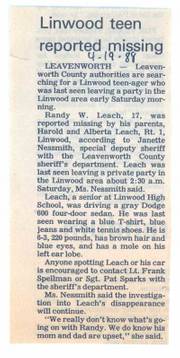 ¢ Steve Daugherty, one of the last people certainly seen with Randy the night he disappeared, showed police in March of 1989 a severed foot in a tennis shoe on the banks of the Kansas River. He said he found it while strolling. Police searched the area for other remains but couldn't find any. They concluded the foot was not Randy's. Daugherty, in his 30s when Randy disappeared, has since died.

¢ Internal police reports about the Randy Leach case began showing up in the Leaches' mailbox. Harold Leach said he doesn't know the source of the documents but believes they came from sympathetic law officers convinced the investigation was being botched by authorities.

¢ In 1993, a man purporting to be a "research journalist" offered his assistance to the Leaches and spent several months without pay interviewing party-goers and others who might have known something about the case. The man went by the names of Terry Martin and Lee Harper.

Martin/Harper pooled information with Leavenworth County Sheriff's Detective Dawn Weston, whom Nye had assigned to review the case. Executing warrants issued by the assistant Leavenworth County attorney, Weston arrested three men for the alleged murder and kidnapping of Randy Leach - but the men were quickly released. Immediately thereafter, Weston and Martin/Harper left the state together for several days, reportedly fearful of their safety.

¢ A Topeka man who volunteered to help the Leaches search for their son was subsequently found shot to death along with his wife. Topeka police ruled it a murder-suicide.

¢ Leavenworth County officials refuse to launch an inquisition into the Leach case. The Journal-World decries the county's law enforcement in a lengthy editorial (May 10, 1990) listing reasons why an inquisition is justified, then concluding: "Something is fishy and officials have not told the complete story."

There's something strange & fishy going on alright.When the police are holding things up & trying to bury the investigation as though this crime is just not that important to solve,that means only one of three thing's to me. 1) Either someone important is involved 2) A relative or there child/blood relation is involved 3) There involved themselves.The kids being satanists in this might be the tip of the iceberg,after reading on satanism I found that whole towns & adults(important powerful town's people)are involved in this evil practice.They put up a front going to church,the PTA,passing themselve's off as loving human beings but there is another side to them.Most people don't believe or won't believe that this would or can happen in there town,but it does & it's real.It seems right from the start of Randy Leach's disapperence that road blocks were thrown up,someone does not want this solved & I bet until you get someone on the police force with some power then it won't get solved.Actions speak louder than word,anyone can say anything but it's there actions that tell the real story & the real story is not enough is/was being done to find out what happened to this boy.When you have a sheriff's detective leaving town for a few days because she fears for her safety,then you have BIG,BIG problems going on in your town that you can't see & you won't hear about.It sounds like alot of dirt has been swept under the rug & hidden,it's time that the authorities started doing there job & if they can't handle it then they need to step down & let someone step in that can do it.