Queen of the D-list

On the celebrity ladder, some rungs are higher than others.

These heights range from the latest team of frat buddies kicked off "The Amazing Race" all the way up to mega-stars such as Tom Cruise, whose every minute action becomes front-page news.

No one seems to be more comfortable climbing up and down this ladder than Kathy Griffin.

The "actress" doesn't just base her comedic persona on observing pop-culture society - she actively dives face-first into it, as witnessed by her Bravo series "Kathy Griffin: My Life On The D-List."

The Emmy-nominated performer has found a niche - whether it is through sitcoms, reality TV, movies or stand-up comedy - from which to embrace and criticize celebrity.

The Journal-World caught up with the Chicago native prior to her first trip to Lawrence for a Homecoming Week show at the Lied Center.

What has been the most quintessential Kathy Griffin moment captured on TV?

I would like to think it was when I went to Iraq and performed for the troops. But it's not like that's something I do every day. But if you want to talk quintessential, it's me getting Botox or me offending someone in the audience. There is a lot of that. There is lot of people going, "Hrrrumph" and leaving. I like that word "Hrrrumph."

Q: Can you reveal the biggest drawback of doing a reality show?

A: There is nothing but drawbacks. Now when I watch the shows I really enjoy it because I'm removed from it. One of the biggest drawbacks is you're always wearing a mic pack. Every time you want to pee, you have to take off the mic pack from your pants. What I do is clip it on my bra, knowing that the soundman is listening to me pee. I'm used to that, but when other people appear on my shows, that's always a tough nut for them to swallow.

Q: What is your favorite reality TV show right now?

A: Do you have all day? I still love "America's Next Top Model" because I plan to someday realize my dream to become a high-fashion runway model. Every time I watch that show, I feel one step closer. As soon as they start taking 45-year-old, 5-foot-3 supermodels, then my time will have come. I love "Flavor of Love." I think it's funny anyone is fighting over Flavor Flav, much less 12 women. I'm really bummed I haven't seen "Survivor" because I've been on the road so much - the "multiculti," multiracial, are-they-going-to-say-the-N-word "Survivor."

Q: Your persona leans heavily on making biting observations about celebrities. Some might even call you mean at times. Do you draw a line between being mean and cruel?

A: I would say I'm not even mean. I really comment on people's behavior. In other words, I don't say, "Star Jones is fat and ugly. Good night, everybody." I say, "Here was my experience with Star Jones. This is why I think she's a pain in the (butt)." I love to make fun of Clay Aiken. But it's, "Here's my experience with him." Yeah, I make fun of Tom Cruise. Is that cruel? No. He's acting like a complete buffoon. 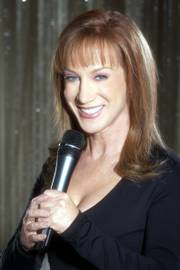 Q: Is everyone fair game at all times? For instance, is Anna Nicole Smith currently off-limits?

A: Anna Nicole Smith is not off-limits because I'm censoring myself, but because there's truly nothing to make fun of right now. Honestly, until her tragedy, I absolutely would make fun of her in my act because her behavior is so bizarre and funny to me.

Q: We know you can dish it out. But are you as good at taking criticism?

A: No. I have no defense for that. I am completely inconsistent. I have days when I can read anything about myself and think it's funny. Then I'll have days when it can absolutely ruin my day for no rhyme or reason. It's the Internet that takes you down. It's not articles. It's the blogs and message boards. You think I'm cruel; that's pure, unadulterated vitriol. One day I'll think it's a riot, and the next day I'll burst into tears.

Q: What are some topics covered in your current live show?

Q: Have you performed in Kansas before?

A: I've never even been in Kansas. So I'm very excited to rock Lawrence, Kansas. I'm from Chicago, so I'm a Midwesterner. I have what we call the Midwestern common sense, which I actually think is intrinsic to my act and my point of view. It's like I've gone to Hollywood but I'm still the Illinoisan inside going, "You got to be kidding me with this stuff!"

Q: Between "The Simpsons," "Seinfeld," "X-Files" and "Pulp Fiction," you've been involved with some of the pop-culture touchstones of the era. Are there any others you really wish you had taken part in?

A: If I had time I would love to be a celebrity judge on "Project Runway." Whenever I participate in that stuff, I always get a great story out of it. ... I guess I'd like to spend some time in the hatch on "Lost." They have a lot of food down there. I would like to go down to the hatch and make a nice meal for myself and maybe do the computer thing once or twice. And I'd like to get an operation over at (the "Grey's Anatomy") hospital.

Q: Who is the easier target this year: Tom Cruise or Mel Gibson?

A: Tom Cruise has more material because you get to make fun of Scientology, the ridiculousness of the name Suri, the mysterious marriage. Mel Gibson makes me a little more angry because he's super right wing and he appears to be homophobic and ignorant. ... But I feel like some switch has been turned on in Tom Cruise. I definitely attribute Scientology to flipping that switch in a big way. I think he could possibly be our new Mariah Carey - and by that I mean the kind of crazy that keeps on giving.