Good: Plenty of characters and attacks

Bad: It was a repetitive game at first. It's even moreso after 85 sequels

Any attempt to differentiate between the Dynasty Warriors and Samurai Warriors series would be an exercise in futility. In virtually every single aspect, they are the exact same franchise with a different word in the title. It would be one thing if the 360 version significantly upped the technical aspects of the game (especially regarding number of onscreen enemies), but it does nothing to improve upon the countless previous titles.

One of the best aspects of the story mode is that a second player can join in before any mission for co-op. It's not necessary to go into a separate mode to do this, it's just a matter of hitting Start if a friend wants to play. Co-op is fun, but suffers from the same problems as previous entries in the Dynasty series. Namely, the entire mission ends if your partner dies. There's no option to revive your fallen friend, and you can't continue the mission by yourself. This can be particularly annoying on some of the longer missions. 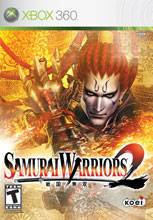 The Shop is actually a nice addition to the formula, and allows you to buy abilities and weapons rather than wander levels looking for them. They can still be found the old way, but it's much easier to just build up your cash stack and buy the specific ones you want.

The basic Easy, Normal and Hard difficulty settings are back. Easy mode is far too easy, as enemies are a total joke. You can literally kill enemies by touching them while you are on horseback. It's hard to want to fight on the ground when you can just hop on a horse and run through every enemy. Your best bet the first time through is the Normal setting. It's actually somewhat challenging and might make you wish there was an option between Easy and Normal.

Graphically, the PS2 version is passable, but the 360 version feels sorely lacking. The underwhelming Ninety-Nine Nights may not have had the best gameplay, but it at least presented tons of enemies onscreen at a time. With the power of the 360, I expect more from the visuals. If Dead Rising can handle hundreds of zombies onscreen at one time, I think we should see just as many of Samurai Warrior's low-polygon enemies.

I've always found the audio in the Warriors games to be hilarious, and this one is no different. The same cheesy voice-acting is back, along with extremely questionable historical vernacular (I'm not sure any samurai ever used the term "Fiddlesticks!"). Perhaps even more funny than the voice acting is the music. Imagine watching "The Last Samurai" if some cheesy '80s rock band like The Scorpions or Twisted Sister were doing riffs over the battle scenes. Picture that, and you'll get a good idea of what Dynasty Warriors is like. Honestly, it's part of the goofy Warriors charm, and longtime fans of the series will be very familiar with it. Despite the huge cheese-factor of these audio aspects, the actual in-game sound effects are fine. You'll hear plenty of war cries, yelling, sword slashing, etc. All of it sounds good (especially in 5.1 surround), and adds to the warlike atmosphere.

This series certainly has a following, but for those that don't absolutely love it without question, it's probably best to stay away from this one. It offers very little in terms of new gameplay experiences, and its repetitive nature will bore you quickly.