6:45 p.m. April 15, 1988 - The last time Randy Wayne Leach's parents saw their son. "He was in a good mood. His dad had just bought him a new John Deere lawn tractor the day before," mother Alberta Leach later told the Journal-World on 6/26. Randy showered and got ready to go out. Father Harold Leach gave him $20 for wax for the mower that Randy was going to pick up at K-Mart. "We don't think he really planned on going to the party," his mom said.

7:00 p.m. - Randy stops by his cousin's house, and then is believed to have driven around Linwood.

8:30 p.m. - Randy and friend drive to DeSoto to a body shop, which was restoring a red 1966 Mustang, his soon-to-be graduation gift.

10:00 p.m. - Randy seen at a bonfire party in West Bonner Springs. Estimates of the size of the party range from 45 to 150 people. Annie Erwin, the mother of the high school senior hosting the party, reports Randy had trouble walking but didn't seem drunk, nor was ever seen with a drink in his hand.

1:30 a.m. 4/16 - John Burns begins to take him home, but Randy didn't have his keys. While Randy looks for his keys, Burns takes one of the last few people at the party home.

6:00 a.m. - Randy's mom Alberta awakes to find him missing. The panicked parents find themselves waiting barefoot in the driveway, when Harold sees Steve Daugherty, an older acquaintance of Randy, drive by the couple's home on Highway 32 and then pass behind the Leach house on a county road. Harold said that later seemed odd because it was so early Saturday and Daugherty was only driving, "about 10 mph,'" where the posted speed limit was 55 mph. But at the time he was too agitated about his missing son to consider the Daugherty sighting significant. He later learned Daugherty was among the last to see his son.

7:00 a.m. - Alberta's brother Richard Rose, who at the time was an officer with the Lawrence Police Department, arrives at the Erwin farm. They wouldn't do a thing to help me. The ground was swept and raked and everything put away, no cups or cans. You couldn't even have told there was a party there," he told the Journal-World in 1998.

Lawrence Journal-World reporter's notes detail: "Friend put Leach in his car after he had too much to drink. Leach later returned to the party. Friend left to drive several others home and would return. But when friend returned, Leach was gone. 'Nobody saw him leave'." And later: "-Prof. counseling? ... -Problems w/ girlfriend : -In trouble, depressed." 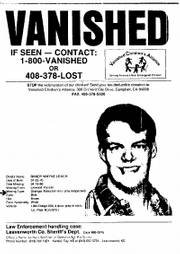 Late April - Randy's high school senior picture reproduced on 20,000 posters distributed around the country by Linwood residents as they go on vacation.

¢ "We believe he was given at least one drink," he said. "They were pouring punch with 150 proof grain alcohol." Cups were reportedly sold for $3 with free refills.

¢ "Apparently someone from Kansas City brought some drugs."