Plays like: The bastard child of Project Gotham Racing

Have you ever thought, "I love the Kudos system of the Project Gotham series, but I really wish there was a racing game that emphasized sportsmanship and prowess over fun and accessibility." Well if you have, 1.) You're an idiot and 2.) That game's here in the form of World Racing 2.

World Racing 2 breaks down into two modes: Career and Single Race. While Single Race allows you to race any of the courses with any of the cars from the game, Career mode is where the meat of WR2 lies. Here you'll name your driver, customize your vanity plate and pick the trendy, Gen X character that you feel best represents your style. Then you'll compete in a series of events that range from standard races, to trick driving, to knock out races. Each victory and completed objective gets you Speedbucks, which can be used to buy new cars and tracks.

The courses come from six locations around the world and, like most racing games, the 160 tracks are all different routes of these larger hub areas. For the most part they are well designed, featuring plenty of the requisite hairpins, winding roads and straightaways. Traffic in the cities ranges from sparse to mild, even when the game describes it as "Heavy." 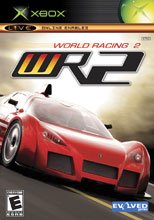 The cars in WR2 all hail from European manufacturers like Mercedes-Benz, Lotus, Alfa Romeo, Wiesmonn and Volkswagen. While the game technically has 90 cars in it, that's a little misleading since many of the cars are really just slight variations on an original model. For example, the difference between the Volkswagen New Beetle RSI and the New Beetle Twin Turbo is a matter of handling and acceleration. Aesthetically they look identical.

Once you get to the actual racing the game takes a turn for the worse. The vehicles all control loose and inconsistently. Taking the same path on the same turn at the same speed can cause completely different results each time you do it. Powersliding is almost impossible to gauge and the difficulty curve is so high that races must be performed perfectly if you even hope to finish. In fact, if you do make a mistake or collide with another car, you're better off just starting the race over because your chances of catching up with any of the drivers is pretty slim. Even if you do have a perfect run, the competition stays right on you, no matter how expertly you drive.

As if that weren't frustrating enough, WR2 also features a punishment/reward system that penalizes you for driving competitively. You lose points for taking shortcuts, bumping cars or even things that are out of your control like getting hit by other vehicles. It's entirely possible to have fewer Speedbucks after a race than before, just based on your driving style. The system is there to emphasize fair or technically proficient driving, but in doing that it also removes most of the fun.

Visually the game is mediocre. Textures could be of a higher resolution and reflections don't track over shiny surfaces correctly. The framerate also gets a little choppy when cruising at high speeds or when there are more than two other racers on screen at a time. The only visual standout is the damage physics of the cars. All of the vehicles take realistic damage when ran up against walls or caught in fender benders. Cars look progressively worse with each accident so it's possible to cross the finish line with shattered windows and doors that swing open.

The audio sounds like it was recorded inside a tin can. Most of the engines sound identical and the brake noise sounds like a left over sound from an old Genesis game. The music is also painfully boring, containing a handful of instrumentals that sound better suited for an elevator.

There's not a lot to love about World Racing 2. It is an extremely frustrating game because of its technical shortcomings and poorly implemented reward system. The visuals and audio are sub-par and the lack of any kind of online multiplayer doesn't do it any favors either. Plus at it's price of about $30, players could just as easily buy a good racer like Grand Turismo 4, Project Gotham Racing or Forza Motorsport for $10 less. Die-hard racers may find its infuriating difficulty and spotty steering as an interesting challenge, but I can't recommend World Racing 2 to anyone else.